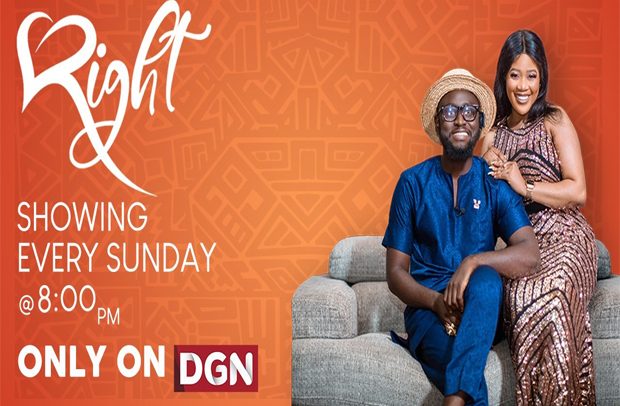 The introduction of the couple game show designed to promote healthy relationships among couples of varied age groups, BEATWAVES gathered, will soon increase the station’s viewership, and it is currently receiving great reviews from a large number of reality show lovers.

Some of the television viewers, mainly couples who spoke to BEATWAVES, said they needed more of such shows on television to educate couples on issues affecting marriage progress.

According to them, they are happy that DGN is showing such educative couple reality programme, adding that they can’t wait to watch the third episode which is on the theme “123 Of Love” on Sunday at 8pm.

Produced by Ayerkie Narnor, ‘Love Right’ is an exciting, educative and informative programme that DGN has introduced to entertain its cherished viewers.

Reports available indicate that after the introduction of the reality show, a number of television viewers have sent messages to congratulate DGN for introducing such an educative and entertaining couple reality show on its network.

Based on a number of responses from television viewers across the country, ‘Love Right’ will soon become one of the most viewed reality show in Ghana.

The structure of the game is for couples to play and compete with other couples to win and grow their cash prize. Each episode will have two (2) couples on stage.

Couples on the show will compete in various games and tasks, as well as share their success stories, challenges and what has kept them together.

‘Love Right’, which is a well carved reality show centred on couples, is being hosted by Augustine Adu-Gyamfi and Ama Serwah.

It is all about the fun and education in healthy relationships, and will feature situations that the viewers can identify with.

The show has two winners; the winning couple of the ‘Love Right’ game show will take home an amount of GH¢30,000 whilst ‘Ghana’s Favourite Couple’ wins a romantic trip.