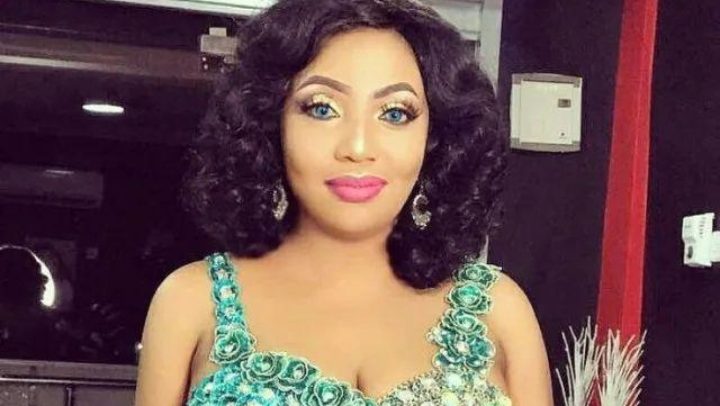 Showbiz personality, Diamond Appiah has refuted allegations that it’s her voice in a leaked audio recording which backed claims that Afia Schwarzenegger allegedly “slept with a dog.”

According to the audio, Afia’s recent tantrums and curses over claims that she slept with a dog were mere gimmicks.

It said the curse won’t work adding that how Afia went about invoking her curses was a clear indication that she indeed slept with a dog.

Many showbiz observers believed the voice was that of Diamond Appiah but she has denied it. She said the audio was doctored.

The Afia dog sex drama started after Afia dragged Chairman Wontumi into a fight between her and media personality Delay.

She alleged that she had sex with Wontumi, claiming that anytime the NPP Chairman ejaculates he farts.

Lawyer Maurice Ampaw in a TV appearance responded to Afia’s claims saying Chairman Wontumi can never date a woman who allegedly slept with a dog.

Afia then decided to take on Ampaw by cursing him and Wontumi in a viral video.

In that video, she was captured standing on a tiled floor and smashing eggs on the floor while pouring alcohol on the floor. Chairman Wontumi also went on to sue Afia through Lawyer Maurice Ampaw for character defamation, claiming FHC2million damage.

Afia also decided to present her case to the gods of Nogokpo shrine after cursing.

Interestingly, the leaked voice of the person believed to be Diamond alleged that “Afia slept with the dog.”

The voice said Afia’s curses were all a smart diversion to the real issue and that was why she invoked the curses on tiles.

The voice continued that Afia didn’t make it known that she didn’t have anything to with a dog, rather she meant that she did not inform Lawyer Maurice Ampaw about it.

“She said and I quote if I told you that I said that I slept with a dog and I didn’t sleep with a dog,

something should happen to me. It means that she slept with the dog but she wanted to say she didn’t tell Lawyer Maurice Ampaw that she slept with a dog. You guys should listen to her very well. This won’t go anywhere. It is just a threat. Nobody curses on tiles. If you go to the villages do you see people cursing on tiles,” the voice alleged.

“She is just a joke. Chairman Wontumi you see she has extended her things to you. She has been doing that to a lot of Ghanaians and you guys kept quiet. You never said anything,” the voice added.

But Diamond on Tuesday said the voice was faked. In a post on her Instagram story, she said it was doctored by persons who are enemies of her and Afia.

“Ahhh ar @queenafiaschwarzenegger and I are laughing at ur fake audio claiming to be my voice.

So u jobless anbobra fuo won’t find something profitable to do. Whiles am busy making money ur still in ur dirty rooms recording fake audios & next time use somebody dat sounds more like me n speaks impeccable English cos that one sounded like her. English dey Nsawam. Prison gai,” she wrote.