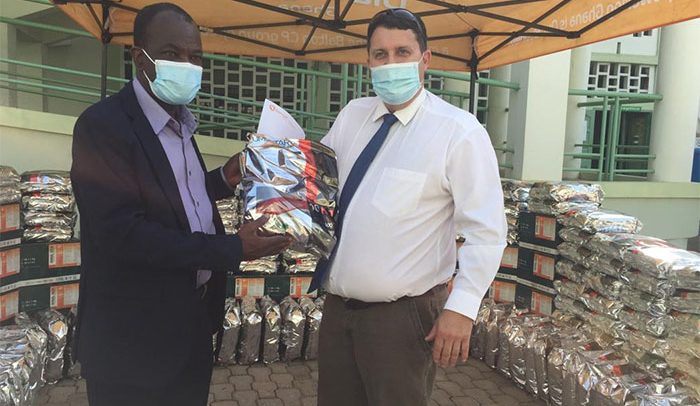 A subsidiary of Balton CP Limited, Dizengoff Ghana, has donated organic fertilizers and cash to the Ministry of Food and Agriculture (MoFA).

The fertilizers including Umostart Super Zn and the cash amount totalled Ghc 70,000.

The donation made on Wednesday, November 11, 2020, at the forecourt of MoFA in Accra, was in support of Ghanaian farmers and the 2020 National Farmers’ Day which was held on Friday, November 6, 2020, in Techiman, the Bono East Regional Capital.

In brief remarks to make the presentation, General Manager of Dizengoff Agriculture, Waldo Boshoff, said it was important to empower Ghanaian farmers.

He says the contributions and sacrifices that farmers make to the nation’s growth and development were immense.

According to him, farming is an extremely difficult job, indicating how farmers spend days under rains and sunshine just to grow food for everyone to eat.

Thus, he said, farmers needed to be supported at all times.

He noted that some of the fertilizers can be used on okro.

He reaffirmed Dizengoff Agriculture’s commitment to remain a supportive partner of Ghanaian farmers, reiterating how the company has over the years supported the national Farmers’ Day Celebration.

Receiving the donation on behalf of MoFA, Asante Krobea, the Technical Advisor to the Minister of Food and Agriculture, thanked Dizengoff Agriculture for the kind support.