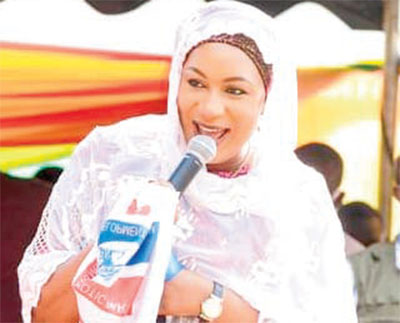 Second Lady, Samira Bawumia, has said the NDC flag bearer, former President John Dramani Mahama, has no track record to create the one million jobs he is promising Ghanaians.

She said Mr. Mahama had the chance to rule the country but mismanaged the economy and sent Ghana to the International Monetary Fund (IMF) before he subsequently froze employment in the public sector.

Addressing the chiefs and people of Nsuta-Kwamang-Beposo Constituency in the Ashanti Region, Mrs. Bawumia asked, “If you can create one million jobs, why didn’t you do so as President?”

She said Mr. Mahama’s promise to create one million jobs if re-elected on December 7 was an attempt to hoodwink the electorate to get the nod, and urged Ghanaians not to fall for the NDC propaganda.

“When the youth and unemployed graduates demanded jobs when John Mahama was President, he told them he was not a magician to provide them jobs. Today, Nana Akufo-Addo has provided 100,000 of these youth jobs under the NABCO and today, the very person who said he was not a magician says re-elect him and he would provide a million jobs. Can he do it?” Mrs. Bawumia asked rhetorically.

“Let us not be deceived. My question to him is, if he knew how to create a million jobs, why didn’t he do it when he was in power? If the NDC is capable, why didn’t they do it in the eight years they were in power?” she stressed.

Mrs. Bawumia urged the electorate to give President Akufo-Addo the chance to continue with the good things he started.

She noted that under the leadership of President Akufo-Addo, “the youth have jobs under NABCO, students are happy, farmers are happy, health workers are happy and so there is no need for change.”