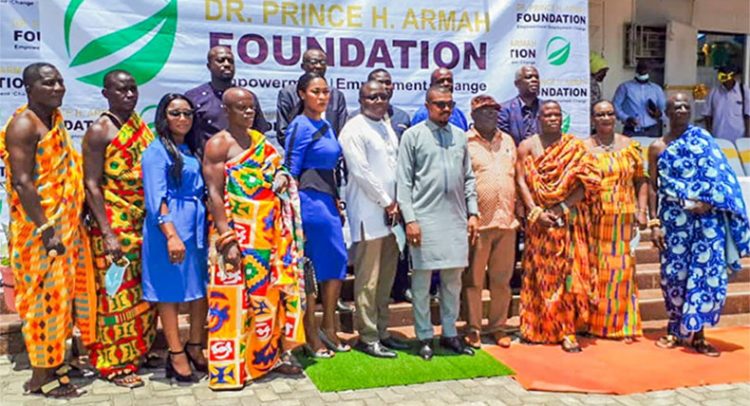 Dignitaries and Board members of DPHA Foundation

Member of Parliament (MP) for Kwesimintsim Constituency in the Western Region, Dr. Prince Hamid Armah, has launched an organization to help improve the quality of life of residents.

The ‘Dr. Prince Hamid Armah (DPHA) Foundation’, founded by the MP of the area, seeks to improve the socio-economic conditions of the people through addressing issues of unemployment, limited access to health and education, and poor infrastructure.

Speaking at the launch and unveiling of the Foundation’s office in the constituency, Dr. Armah expressed that people do not always need handouts but a chance to make a dignified living for themselves.

He was therefore hopeful that the Foundation will complement the government’s effort in addressing the three focused socio-economic areas for the people of Kwesimintsim.

“The DPHA Foundation we are launching today is my humble attempt to also contribute to a better life for people of Kwesimintsim in particular, and potentially across the Western Region,” he said.

Dr. Armah said the Foundation will serve as one leg of the development tripod for the constituency with the other two being the Office of the Member of Parliament and the Effia-Kwesimintsim Municipal Assembly.

“It is my firm hope that these three legs will work in close coordination for the ultimate good of the people of Kwesimintsim,” he noted.

He said although the government bears the major responsibility of addressing socio-economic issues, no national government has been able to do it all.

“The developed countries that we look at enviously are the products of public and private sector partnership. Some of the greatest expansions in access to health and education have been the result of private sector efforts, led by men and women who decided to plough back some of what God had gifted them into helping their fellow men and women,” he said.

He said Ghana has the talents, the skills and the means to bring a better life to more people than government is able to within the context of its overstretched fiscal resources.

The event was also used to officially outdoor the board members of the Foundation.

Members of the board include Albert Tetteh-Entsie, Managing Partner of Febert Consult and ASL Consulting and Managing Director of Febert Oilfield Services Ltd; Dr Benjamin Akumanyi Nkrumah, CEO of the Nhyirakesi Wellness Hospital and Nhyirakesi group of Companies; and Abdul Buhari Osman, the Deputy Director of the National Disaster Management Organisation (NADMO) in the Effia-Kwesimintsim Municipality.

Others are Sylvia Ansah, principal administrator at the Takoradi Technical University, Joe Castrus Otoo, a businessman and hotelier and Philomena Assifuah a businesswoman and former government appointee to the Effia-Kwesimintsim Municipal Assembly.

Augustine Asiljoe, the Acting Chief Executive Officer of the Foundation will also serve on the board, as will the founder, Dr Prince Hamid Armah, who joins in an ex-officio capacity.

Accepting the charge on behalf of her colleagues, Chair of the Board, Nana Yaa Arthur, the Aviation Operations superintendent at Tullow Oil and Vice President of Virtuous Board Room, expressed gratitude for the opportunity to serve the people of Kwesimintsim.

She pledged to use her experience and skills to work towards the realisation of the Foundation’s goals.
Since its inception in 2018, the Foundation has undertaken several initiatives. In the area of health, it has organised medical and eye screenings, which also involved the provision of basic treatments.

In education and skills training, DPHA Foundation has trained over 500 people in various vocational trades, and another 700 in ICT, have twice donated mathematical sets to candidates for the Basic Education Certificate Examinations and donated over 20,000 exercise books.

It also donated another 20,000 supplementary reading materials to first and second circle institutions as well as laptop computers to some trainees undergoing an ICT programme.