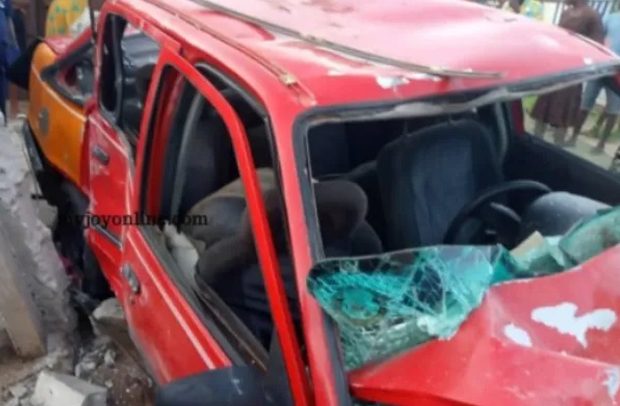 Five persons have died at Tegbi in the Anloga District after being hit by a careless driver.

According to eyewitnesses, the car which was moving at top speed crushed a mother, her three children and a 70-year-old woman to death.

The assembly member for Tegbi Afedome, Noel Kokoroko, stated that the incident happened at Tegbi Vakpomda when the driver, Wisdom Kpodo, allegedly took the taxi from a friend after winning a GH¢1200 lottery.

In his quest to jubilate his fortune, he tried to overtake a motorbike and a car, thereby resulting in the ghastly accident.

“Wisdom Kpodo jumped into a friend’s car with registration number GT4482U after winning just GH¢1200. He was on his way from Keta after winning the lottery.

“He was shouting ‘no size no size’ and unfortunately ran into a house where five people were and knocked down after he attempted to overtake a taxi and a bike, resulting in the death of these people,” Mr. Kokoroko narrated.

Other victims are receiving treatment at the Keta Government Hospital.

Meanwhile, Wisdom Kpodo, who initially tried to escape, turned himself in to the Keta police to help with investigations.