e-Cedi To Be Tested In Trial Phases 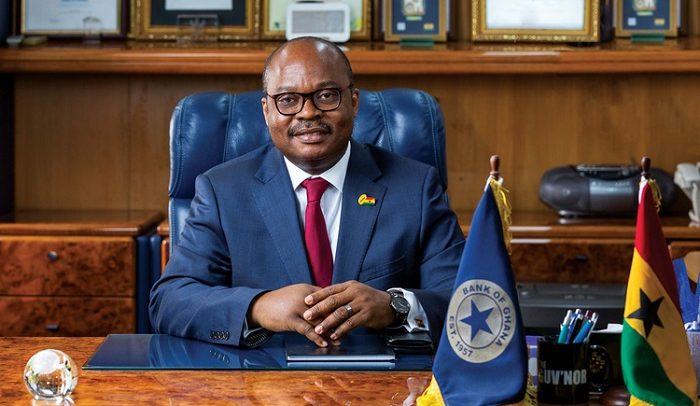 DR ERNEST Addison, Governor of the Bank of Ghana, has indicated that the electronic Cedi will be tested in trial phases with banks, payment providers, merchants, consumers and other stakeholders for a nationwide rollout.

This is expected to present an opportunity to build a robust, inclusive, competitive and sustainable financial sector.

Speaking at the 40th anniversary celebration of the Akuapem Rural Bank Limited at Mamfe Akuapem in the Eastern Region Saturday, he said, “We expect that all rural and community banks will collaborate with ARB Apex Bank to leverage the opportunities available with digitisation within the payment ecosystem.”

He continued that central banks around the globe were exploring the introduction of digital currencies and Ghana was among the leading African countries to enter the pilot phase.

“The e-Cedi, which is the first general-purpose central bank digital currency in Africa, will complement and serve as a digital alternative to physical cash, in line with the Government’s Digital Ghana Agenda.”

The Bank of Ghana recently signed an agreement with G+D to implement a pilot CBDC project as a precursor to the issuance of a digital form of the Cedi. The project is part of the ‘Digital Ghana Agenda’, which involves the digitisation of the country of 30 million people and its government services. The digital Cedi, or ‘e-Cedi’, is intended to complement and serve as a digital alternative to physical cash, thus driving the Ghanaian cashlite agenda through promotion of diverse digital payments, while ensuring a secure and robust payment infrastructure in Ghana.

It also aims to facilitate payments without a bank account, contract, or smartphone, by so doing boosting the use of digital services and financial inclusion amongst all demographic groups. The project will be divided into three phases – design, implementation and pilot.

“As we seek to improve the regulatory and operational prospects of rural and community banks, Mr. Chairman, we must admit that a lot of progress has been made within the sector. From 30 rural banks in the 1980’s, we now have 145 of such institutions with a branch network of about 851. The increased number of rural banks has been accompanied by increased customer reach, technology deployment, as well as improved delivery of financial services within the local communities,” he added.

Dr Addison said as at the end of June 30, 2021, the overall profitability of the rural banking sector was positive, recording an annual growth of 27.4 percent in total assets, which amounted to GH¢6.5 billion.

Advances, deposits and investments also increased by 23.6, 31.2 and 50.1 percent, respectively. The sector’s non-performing loans ratio declined to 11.5 percent from 12.3 percent a year earlier, signalling an improvement in asset quality.

“It is our expectation that all rural and community banks will fully comply with the minimum capitalisation requirement of GH¢1 million by the end of 2021 and maintain the increased capital unimpaired,” he noted.