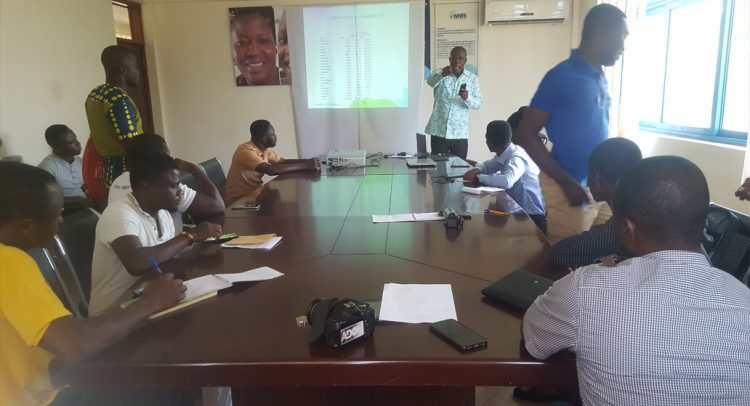 Officials of NHIA briefing the media

Officials of the National Health Insurance Scheme (NHIS) in the Bono, Bono East and Ahafo regions say there has been a remarkable improvement since the introduction of the electronic renewal (e-renewal) system for clients whose membership has expired.

The Regional Operations Manager of the scheme, George Oppong Dankwa, speaking at a media briefing on the quarterly performance of NHIS in Sunyani, said the e-renewal model had eliminated the stress clients went through in renewing or applying for cards.

He said it had also eliminated transport cost for clients and checking of claims had become easier.

He disclosed that the total e-renewal as of September 2019 had increased from a target of 371,382 to 497,957 and that showed an improvement in renewal of membership.

According to him, the National Health Insurance Authority (NHIA) through the Social Welfare Department had also registered people in the prisons, some pregnant women and children, adding that the total number of poor people registered currently stood at 107,972 representing 63 per cent of a target of 171,036.

On his part, the Regional NHIA Director, Joseph Mensah, was delighted the scheme had made what he called tremendous impact by way of membership during the third quarter of 2019.

Mr. Mensah said currently the scheme had captured 1,474,332 representing 101.41 per cent membership for the three regions alone. He, therefore, pleaded with beneficiaries of the scheme to resort to renewing their National Insurance cards through the electronic system to avoid delays.

He pointed out that the processes involved in the e-renewal were far easier than the manual system and urged the public to embrace the initiative.

Chief Convicted Of Threat Of Death