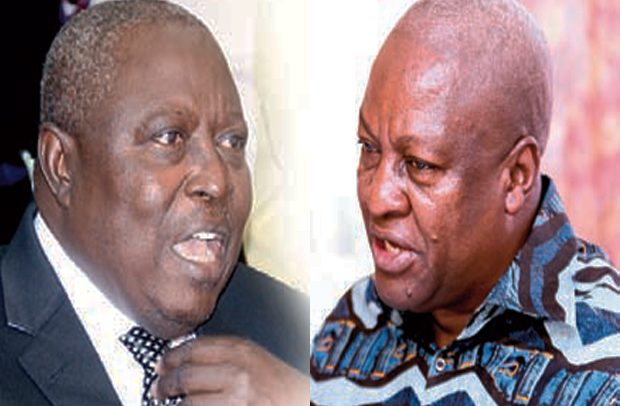 THE Special Prosecutor (SP), Martin Amidu, has challenged the flagbearer of the National Democratic Congress (NDC), ex-President John Dramani Mahama, to “subject” himself for investigation if he thinks he is clean.

Mr. Amidu said he was not minding Mr. Mahama because of security concerns over the impending general election which the ex-President is also in the running.

He said that his long public service, spanning various aspects of security and intelligence from February 1982 to January 7, 2001 and July 2009 to January 2012, made him “more experienced in determining when it was not conducive to the national security interest to foolhardily take certain law and order actions.”

In a statement released to the media, responding to Mr. Mahama’s ‘stupidity’ comment on the work of the SP who had unveiled him as Government Official 1 in the raging Airbus SE scandal, Mr. Amidu said “the SP owes that exercise of discretion to his vast experience over the years, his responsibility to maintain national stability, his conscience as a patriotic anti-corruption crusading Ghanaian. There is no question of stupidity or cowardice about it.”

He indicated that any person aspiring to be President of Ghana for a second term and did not know that “a cardinal principle in security and intelligence is that ‘caution is the better part of valour’ was not and is not worth the vote.”

“The former President has also not offered to make any voluntary statement to this office despite the publication of an alleged interview containing admissions purportedly made by the former President to the Daily Graphic reporter without the full voice recording which in the meantime remains just hearsay,” he noted.

He pointed out that the NDC presidential candidate could not pick and choose from the Agyapa Royalties Limited report, and intimated that the last sentence in the first paragraph on page 54 of the report “offered former President Mahama the opportunity to voluntarily come forward and make a caution statement.”

“Your Excellency, the wise and the brave former President Mahama, man-up, wise up, and be brave enough to come with two lawyers of your own choice to be cautioned and interrogated by this office to demonstrate your valour and wisdom as not being elected Government Official 1 and also as not being the first guarantor to Samuel Adam Mahama’s passport application.

“The 64 page Agyapa Royalties Limited report demonstrates clearly that nobody can use me against another citizen.

“Former President Mahama should go back and listen to the vetting by Parliament of the SP and the SP’s interview with ‘Time with David Ampofo’ to be assured that crime would always remain crime no matter whose ass was gored.

“My friendship with the Minister for Finance never stopped me from making a professional assessment on the conduct of the Ministry of Finance in the 64 page Agyapa assessment report.

“I have no brother or friend when it comes to my crusade against preventing corruption and fighting corruption. Ghana first always,” he concluded.

Last week, Mr. Mahama launched a blistering attack on Mr. Amidu for revealing that he (Mahama) was the Government Official 1 in the Airbus SE global Airbus scandal report.

He called Mr. Amidu’s action “stupid” and said he (Amidu) was a “coward” and went ahead to dare the SP to prosecute him if he were man enough.

Mr. Mahama’s attack stemmed from a corruption and anti-corruption assessment into the recent Agyapa deal relating to the Gold Royalties Monetization Transaction under the Minerals Income Investment Act 2018 (Act 978), which has now been put on hold by President Akufo-Addo until the next Parliament, released by Mr. Amidu where he talked about some of the ongoing investigations his office was undertaking, including the infamous Airbus saga.

Mr. Mahama said among other things that “you are investigating Agyapa, present a report on Agyapa; because you know Agyapa is going to be discussed, you have indicted the President’s cousin as Finance Minister and you are afraid that you are presenting only a report on Agyapa, so in the Agyapa report you put some other report that balances the equation. I thought he was man enough.”

He added that “But because he was a coward and they knew that Agyapa was going to be discussed today, they put a paragraph on the Airbus to equalize the discussion.  I mean what stupidity is this?”