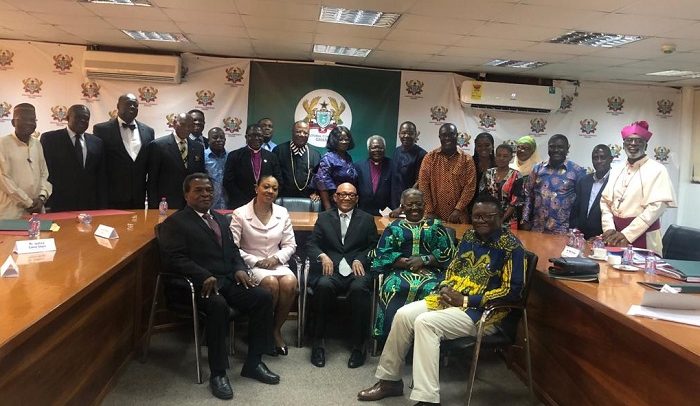 Members of the Advisory Committee with the EC officials

In its maiden correspondence to the political parties, the recently empanelled Advisory Committee of the Electoral Commission (EC) has urged political parties and various stakeholders to remain calm over the planned compilation of fresh voters’ register.

The call was necessitated by recent support and opposition for the compilation of a new register amidst planned demonstrations by the opposition National Democratic Congress (NDC).

The committee made the call in a statement signed by its Chairman, Justice Francis Emile Short, following a meeting with the leadership of the EC yesterday.

The meeting was to afford the EC the opportunity to justify the procurement of a new biometric voter management system and compilation of a new voters’ register for the 2020 general elections.

“At the end of the meeting, it was agreed that the Electoral Commission and the Eminent Advisory Committee will meet with members of the Inter Party Advisory Committee (IPAC) to have further deliberations on the matter,” the statement said.

The NDC has put forth various reasons why a new roll of voters is not in the interest of the country.

On the other hand, the ruling New Patriotic Party (NPP) claims there is the need for the roll to be replaced because of many reasons, some of them being that it is bloated and laden with details of unqualified persons.

Supporters of the compilation of a new register who do not belong to the political parties have posed a question as to why the opposition party is always opposed to the changing of the roll of voters.

The outcome was largely scorned at by cynics who claimed it was skewed to favour a non-compilation.

For how long would the NDC members have their way about the voters’ register is one of the typical questions being posed by cynics.

The Director of the Elections of the NDC, Elvis Afriyie-Ankrah, was recently reported to have urged his party to mount pressure, including streets protests against the compilation of a fresh register because that for him would inure to the interest of the party.

His call for the occupation of the EC office and the streets of Accra by the NDC has been described as irresponsible by a cross section of Ghanaians.