‘Entrepreneurship Is Force For Economic Growth’ 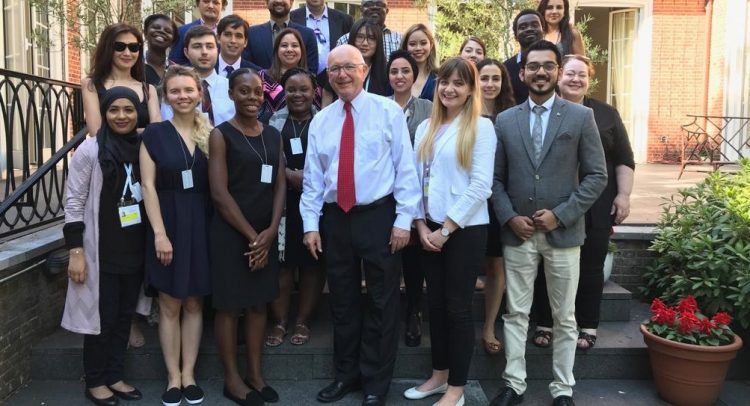 Ambassador Hoekstra with the journalists after the meeting

For developing countries looking to grow their economies, fostering innovation, creativity and unleashing the potential of young people might be the way to go, says U.S. Ambassador to the Netherlands, Peter Hoekstra.

Using his country as an example, Ambassador Hoekstra said through creating an entrepreneurship ecosystem, the U. S. has seen the development of some of the greatest entrepreneurs in the world.

He said “we foster innovation and creativity and unleashing the potential of our people, those are key values to who we are and we want to expose that to as much of the world as we can.”

He added that “we want the rest of the world to be successful as well and we hope that they would share and embrace many of the values in the form that is appropriate for them.”

Ambassador Hoekstra was speaking with journalists on the Global Reporting Tour, organised by the Foreign Press Centers, U.S. Department of State, Bureau of Public Affairs at his residence, ahead of the opening the Global Entrepreneurship Summit (GES) 2019 in the Hague.

Announced in 2009 by President Obama, the GES has expanded into a platform for entrepreneurs and investors as well as governments to interact, share best practices and make deals for investment and partnership.

About 2000 people from 140 countries are expected to attend the summit in the Hague; 1200 entrepreneurs, 300 investors and government officials and partner organizations.

The Summit themed ‘The Future Now has agriculture, connectivity, energy, health and water as the sub themes.

Ambassador Hoekstra said it was the vision of the U. S. to see the economic development and prosperity that entrepreneurship brings replicated in other countries hence the co – hosting of the GES.

“We believe that entrepreneurship is a force for economic growth and prosperity and that is the experience of the countries where we have hosted it,” he said.

Sharing how the U. S. is making it, Ambassador Hoekstra said we have a “great culture and environment for entrepreneurship, rule of law, protection of intellectual property and we have a financial system that can support startups.”

He noted that the overarching goal of the GES Summit was for people to take the ideas that would be shared back home and “apply it in your own countries in what you think is the most appropriate and effective way to assist and help your countries and your people to become more prosperous and successful.”

I Will Come After You- Suhum MCE Threatens Journalist