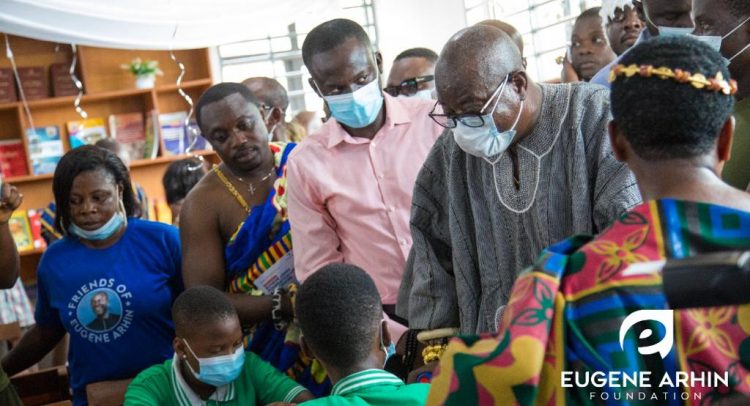 It was all joy and merrymaking on Tuesday when the town of Awutu Breku witnessed the commissioning of its first-ever library together with an Information, Communications, and Technology (ICT) Centre.

The chiefs and people of the area could not hide their excitement amidst drumming and dancing.

This was made possible by the kind benevolence of Eugene Arhin, the Director of Communications at the Jubilee House (presidency).

He said he was touched by the plight of the people of his hometown, Breku which has never had a library to put up the ultra-modern facility which is fully stocked with books and computers for them through the Eugene Arhin Foundation. 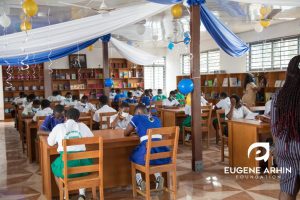 This was done with the support of the Ghana Library Authority (GLA) and the Ghana Investment Fund for Electronic Communications (GIFEC).

For Eugene Arhin this was a dream come true.

That, he said was because the first time he ever entered a library in his life was when he got to the university.

It brings to 44 the total number of libraries constructed by the Akufo-Addo led New Patriotic Party (NPP) administration since it took over the reins of the country in 2017.

At the time they took office, there were 66 existing libraries across the country. 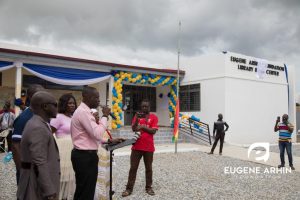 Having handed the keys of the library to the community to be run by the Ghana Library Authority, this brings to 106 the total number of libraries in the country today.

The Director of Communications at the presidency who is Chairman of the Eugene Arhin Foundation, therefore, encouraged students in the area to make good use of the library,  “once you learn, know that you are building your future.”

With hard work humility and determination, Eugene assured students in the area they can reach where he has and even do better.

He thus used the opportunity to thank President Akufo-Addo but for who he may not be where he is today for the confidence reposed in him by allowing him to serve in his government.

That said, he asked Ghanaians to continue to pray for President to achieve the goals he has set to achieve for Ghana.

He has since promised to put up two additional libraries in the area; one for Awutu Bawjiase and Awutu Senya, saying “we are going to do more and more for Awutu Senya.”

Central Regional Minister, Justina Marigold Assan as well we the chiefs asked for God’s blessings on Mr. Arhin for his commitment to helping develop education in the area.

She urged the students to study hard and be humble in whatever they do.

She decried the spate of teenage pregnancy in the Central region and charge students in the region to remain resolute and pursue their dreams.

Joseph Aidoo, DCE Awutu Senya commended the Foundation for its contribution towards education in the area.
He said the library had come at an opportune time to augment the government’s aim to achieve the UN sustainable development goal four which targets that by 2030, all girls and boys complete free, equitable, and quality primary and secondary education leading to relevant and effective learning outcomes.

The provision of 12 years of free, publicly-funded, inclusive, equitable, quality primary and secondary education – of which at least nine years are compulsory, leading to relevant learning outcomes – should be ensured for all, without discrimination.