Evangelist, Others Nabbed For Robbery 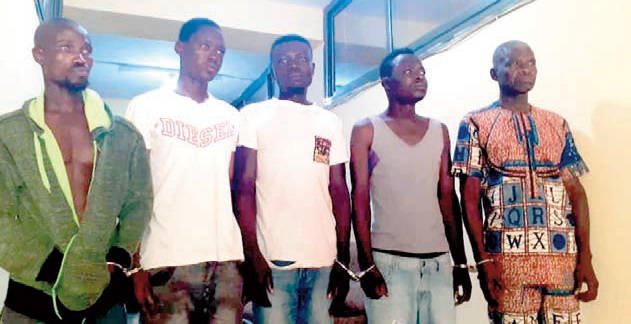 The Volta Regional Police Command has arrested five people including an evangelist in connection with a robbery attack at a petrol station at Peki-Wodome in the Volta Region last Wednesday.

The Volta Regional Police Commander, DCOP Edward Oduro Kwarteng, said in a statement that the suspects were picked up in the early hours of Thursday.

He said the National Police Control room received a distress call about the incident and swiftly deployed officers to the scene and with the support of the Peki-Wodome Neighbourhood Watch Committee, three of the suspects were arrested.

Preliminary interrogations revealed that there were six other persons including one Pablo (currently at large) involved and according to the police, Pablo who is a former worker of the filling station appears to have masterminded the robbery.

He said Pablo is suspected to have told his accomplices that the back door of the filling station was weak and could easily be broken into and based on that vital information, the gang attacked the place.

About GH¢2,211 and other valuables were taken by the suspects and further investigations revealed that Edem Fiati and Felix Dupe (the evangelist) are already standing trial in another robbery incident within the Ho municipality.

“The command wishes to express its appreciation for the excellent collaboration between the police and the Peki-Wodome Neighborhood Watch Committee and entreat other communities within the region to form similar groups to assist the police, as crime fighting is a shared responsibility,” the Regional Commander said.

Let’s Tone Down On Partisanship - Nana