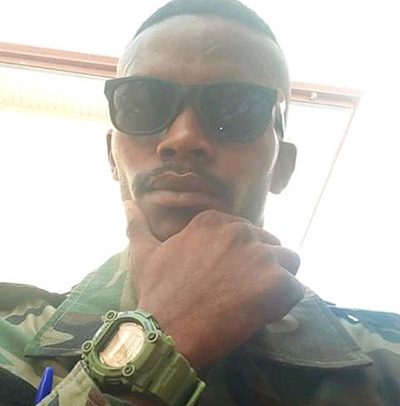 The suspect in a military uniform

A 29-year-old man who allegedly posed as a military officer to dupe a phone seller in Obuasi in the Ashanti Region has been arrested by police.

Erasmos Kudekpe from the Volta Region also pretended to be a member of the government anti-illegal mining taskforce, Operation Vanguard stationed in Obuasi.

He is also known as Kelvin, Fredrick and Nana Owusu beside Erasmos Kudekpe and he is believed to have scammed many people.

According to the police chief, the suspect told police during interrogation that he was a member of the band team attached to the Operation Vanguard taskforce, which is false.

DSP Assenso stated that police arrested Kudekpe following information received from a phone seller, who believed he had been scammed by an offender posing as a soldier.

He narrated that the suspect again claimed to be a soldier to many other residents of Obuasi and once arrested someone for an offence and handed him over to the police for prosecution, but later called to let the person go for lack of interest in the case.

Kudekpe had in his possession military uniforms at the time of his arrest, the police commander indicated.