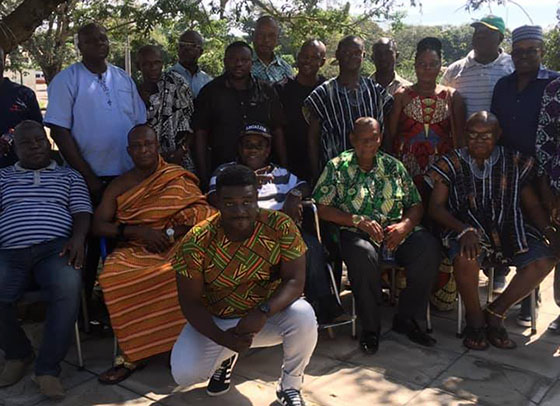 Highlife Is Alive Fan Club, a fan club formed to project Ghanaian highlife music across the world, was launched at a colourful ceremony held at the premises of the Ghana Broadcasting Corporation (GBC) in Accra on Monday.

The club seeks to make highlife a national art form, promote it as an international art, and work towards its recognition as a national cultural heritage.

The launch ceremony attracted a number of personalities which include the Director General of GBC Prof. Amin Alhassan, Akunu Dake, and Mike Hagan, among others.

Some of the highlife musicians who graced the event were Pat Thomas, Gyedu Blay Ambolley, AB Crentsil, Bessa Simons, Pozo Hayes, Naa Amanua of Wolumei fame, Kumi Guitar and a host of others.

Speaking at the launch, veteran highlife musician, Gyedu Blay Ambolley, called on Ghanaian music stakeholders to preserve, develop and promote highlife as a genre that represents the national identity.

“Every country has its own music, so why do we have to leave highlife and chase other genres like reggae, and dancehall, among others. It is quite sad that our radios are supporting the promotion of other genres, which is a total deviation,” he said.

He bemoaned the missing identity of music in recent times, and expressed the belief that the club would help uplift and sustain the highlife genre.

Gyedu Blay Ambolley urged all stakeholders and various media houses to support the fan club in projecting the image of highlife music globally in order to promote the country’s cultural heritage.

The Director General of GBC, Professor Amin Alhassan, who launched the club, emphasised the need to celebrate and promote highlife as the national identity.

He said promoting and supporting highlife music, which is wholly Ghanaian, was also one of the ways of promoting the national identity.

He, therefore, proposed the setting up of a national highlife band to help revive highlife music.

Prof. Alhassan mentioned that the fan club was an important platform to advocate the institutionalisation of highlife as a national art form, which most advanced countries had done over the past years.

On his part, the chairman of the fan club, Nii Krotia I, Noyaa Mantse Ngleshie Alata, known in private life as Mr. George Ayee, said the club would help create a common platform for highlife lovers, artiste and other industry players, adding that it was about time that highlife was recognised and instituted formally as a national art treasure and heritage.

According to him, highlife music could be used as a developmental tool to transform the mindset of the people of the country due to its good lyrics.