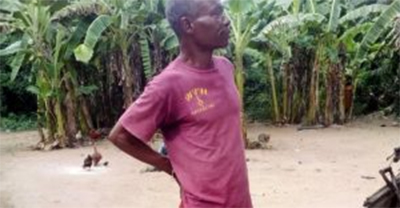 A 55-year-old Osman Mumuni, aka Commander, who has been accused of torturing his 10-year-old son over stealing GH¢250, has been sentenced to two years’ imprisonment by the Weija Circuit Court in Accra.

The convict, a private security man and a farmer, accused his son of stealing and as a form of punishment chopped off his right ear and also cut one of his fingers with a blade.

Mumuni had put the boy’s hand on fire to force him to confess before perpetrating the heinous crime.

The accused was charged with two counts, including the use of offensive weapon and causing harm contrary to sections 70 and 69 of the criminal offences Act 1960 (Act 29).

He pleaded guilty to both counts in the court presided over by Bernard Bentil  and  was sentenced on his own plea to two years’ imprisonment on each count to run concurrently.

Prior to passing the sentence, the judge stated that the accused was a first offender and that he had shown remorse but said the court wanted the punishment to serve as a deterrent to other child molesters in particular.

The convict has since been transferred to the Ankaful Prison in the Central Region to begin his sentence.

Mumuni was arrested by the Weija Police over the weekend for the crime he perpetrated against his own son.

The son was said to have claimed he wanted to use the cash to buy a dress for the upcoming Eid-Ul-Fitr celebration after the Muslim Ramadan.

Other sources said the boy wanted to use the cash to pay for transport to Suhum in the Eastern Region, where his mother is currently residing.

The incident happened at Domiabra-Obom in the Ga-South Municipality in the Greater Accra Region.

Eastwood Anaba 'Dribbles' On The Mic