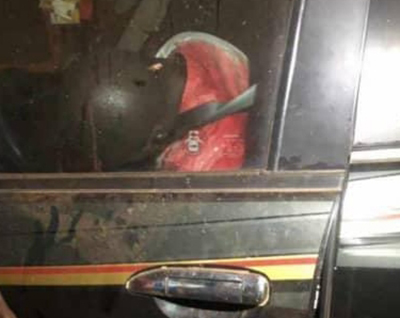 The remains of Samuel Osei

THE DRIVER of the District Chief Executive (DCE) for Amansie South District in the Ashanti Region has been shot dead by suspected armed robbers in a gory fashion.

The driver, identified as Samuel Osei, believed to be 40 years old, was shot whilst driving a four-wheel drive car of the assembly around 7:00 pm on Monday at Dadease.

The robbers, who had then taken total control of the Dadease community, also shot two other people dead, sparking fears among the hapless residents.

The bodies of the three dead persons had since been deposited at a morgue at St. Martin’s Hospital at Agroyesum.

Other reports making rounds at Dadease have it that another person (name not known), who was also shot by the robbers, is struggling for his life.

Reports making rounds indicated that the robbers had visited Dadease on that fateful evening ostensibly to rob a popular gold dealer, who is said to be rich.

It is, however, not known as to whether the robbers managed to rob the said popular gold dealer in the community as they had planned.

According to eyewitness reports, it appears something went wrong in the course of the robbery of the gold dealer, so the robbers started to shoot indiscriminately.

In the process, Kwaku Danso and Osofo were shot at close range by the hoodlums and as the driver of William Asante Bediako, DCE for Amansie South District, appeared at the scene with the assembly’s car, he was also shot.

Samuel Osei and three other people in the vehicle, including the coordinating director of the assembly and two soldiers, were said to be returning from a Covid-19 sensitization exercise but unknown to the driver, robbers had taken control of Dadease and before he could know what was happening there, the robbers opened fire on them.

He was said to have been hit by a bullet at close range and in the process, his car crashed into a nearby tree before it stopped.

The police were called in but before they arrived at the crime scene, the hoodlums had fled into the bush.

No arrest has been made yet, but police sources disclosed that the law enforcement agents were making headway into the case.