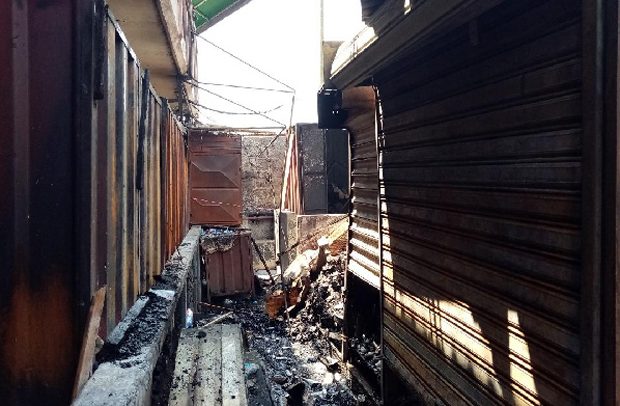 Parts of the Makola Shopping Mall at the Accra Central Business District was on Sunday morning destroyed by fire.

The inferno totally burnt few metallic containers and one big shop of the external part of the Mall, adjacent the Electricity Company of Ghana (ECG).
This is the second fire in about three weeks.

Public Relations Officer of the Ghana National Fire Service (GNFS) Ellis Robinson Okoe, speaking to the media, said around 7:24am in the morning, the Service received a distressed call from the Mall informing them about the fire.

He added that the GNFS responded to the call and got to the scene in time, thus was able to bring the fire under control at 1010 hours.

Mr Okoe said the Service was able to totally extinguish the fire at 1118 hours in the morning.

He said the fire totally burnt small portion of the Mall made up of one big shop and other few metallic containers.

Mr Okoe said the challenge of the GNFS was access to the place, and that pressure of the fire hydrants around the area was low, as a result they had to go to Farisco at Adabraka to get the water to combat the inferno.

He added that the Service had support from the Military, Police, the Water Company in its fight to extinguish the fire.

Mr Okoe said Mayor of Accra, Mohammed Adjei Sowah, had formed a committee comprising the GNFS, Police, Ghana Water Company and ECG to investigate the cause and circumstances leading to the outbreak of the fire.

Edwad Adjei Gyimah, a Security Officer CBG Bank of the Makola branch at the Mall, said they notice the fire around 0715 to 0720 hours in the morning and placed a call to the GNFS.

He said prior to that, they realised that electricity to the area was off and that was when they noticed smoke rising from the affected area.

He commended the GNFS for arriving at the scene early and successful quenching the fire, while preventing it from spreading to other parts of the building.

Jessica Osei, one of the Shop-owners affected by the fire, said she was totally confused as the inferno totally destroyed her shop.

She said she sells Jewelleries, Chains, Ribbons, Combs among others and that where to get capital to restart again was going to be her major challenge.

Madam Osei appealed to the government and other philanthropic bodies to come to their aid to enable them to restart their businesses which would ensure their survival in these difficult times.