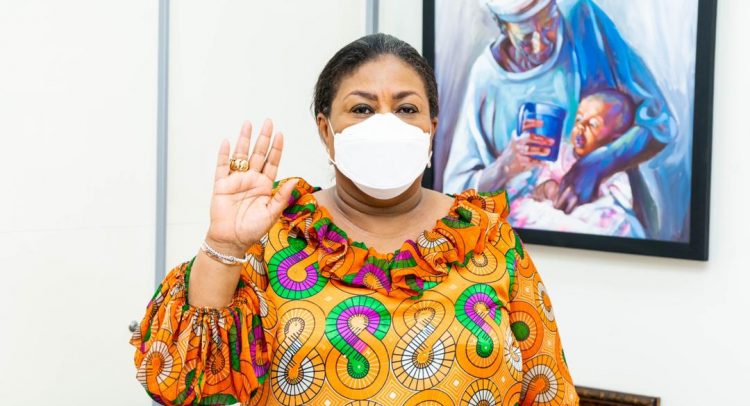 First Lady, Mrs Rebecca Akufo-Addo, has called for the needs of women to be placed at the heart of the Covid-19 response measures.

She said it is of great importance to uphold the rights and fully leverage the potentials of women leaders in pandemic preparedness, response, and recovery.

“The perspectives of women and girls, in all of their diversity, must be integrated into the formulation and implementation of policies and programmes in all spheres to attain the desired results,” she said.

The First Lady also noted that efforts must be made to disseminate information on how women’s immunity and ability to fight the Covid-19 can be boosted by adopting healthy lifestyles and eating more nutritious locally produced foods as well as exercising and keeping to the safety protocols.

“Women must be champions and facilitators of the drive to have a head immunity against Covid-19, as they have admirably done through the years, to overcome previous pandemics,” she added.

She also called for socio-economic plans to be redesigned purposefully to better the lives and futures of women and girls.

“Everyone must daily make a conscious effort in thought, speech and action towards the achievement of gender parity, sooner than later, in the defeat of the World Economic Forum’s prediction that ‘none of us will see gender parity in our lifetimes, nor likely will many of our children.’ Working for a sweet victory, with a ripple effect in the interest of all, must be the common agenda,” she said.

In a statement to commemorate International Women’s Day (IWD) marked in March 8, every year, she said
building an inclusive and resilient society in tandem with the attainment of the Sustainable Development Goals and achievement of the 2021 IWD theme calls for unity and focus, both by women and men in Ghana and yonder.

She said the Covid-19 pandemic is known to affect everyone everywhere, but impacts different groups of people differently, deepening existing inequalities and therefore called for pragmatic measures to help close these inequalities.

“This is important because even though earlier data indicated that the mortality rates from Covid-19 may be higher for men other reports say the pandemic is having devastating social and economic consequences on more women and girls. This is because nearly 60 per cent of women work in the informal economy, earning less, saving less, and at greater risk of falling into poverty,” she stated.

She further stated that the UN Women report indicates that women across the world are facing increased domestic violence, unpaid care duties, unemployment and poverty due to the pandemic and that despite women making up a majority of frontline workers, there is a disproportionate and inadequate representation of women in the national and global Covid-19 policy space.

“Again, as markets fall and businesses close, evidence abounds that millions of women’s jobs are disappearing, while most of them continue to lose paid employment, forcing them to engage in unpaid care work due to the exigencies of the times, including school closures and the increased care for the aged,” said.

She said apart from Ghana, and the other countries, whose male presidents have been praised for controlling and managing the pandemic with strategic interventions and policies, the majority of the countries that have been successful in stemming the tide are said to be headed by women.

“We, therefore, salute the leaders of Ethiopia, New Zealand, Germany, Finland, Denmark, Slovakia and the others, for making us proud.

They have demonstrated that despite the new barriers brought by the pandemic to compound the pre-existing social and systemic challenges that women face in their bid to participate in the leadership arena, working together around the campaign theme: “#ChooseToChallenge,” would help in changing the status quo of biases and stereotyping that impede achieving gender equality,” Mrs. Akufo-Addo said.

*IWD*
International Women’s Day presents the global opportunity to celebrate the social, economic, cultural and political achievements of women, the world over.

Marked annually, on March 8, the International Women’s Day (IWD) is one of the most important events on the United Nations’ calendar, which makes it possible to raise awareness on women’s equality, achievements, and challenges, as well as lobby for accelerated gender parity.

The Day, sanctioned by the United Nations (UN) in 1975, when it officially celebrated it, inspires support for organisations that help women, globally, and creates the opportunity to fundraise for female-focused charities.

The 2021 theme for the IWD, announced by the UN Women, is: “Women in Leadership: Achieving an Equal Future in a COVID-19 World”, which celebrates efforts by women and girls in creating a more equal future and Covid-19 pandemic recovery.

This is a parallel global campaign theme: “#ChooseToChallenge,” highlighting the importance of challenging biases and misconceptions in the interest of creating a more inclusive and gender-equal world.

The celebration of International Women’s Day continues to be very relevant because of the many issues concerning women and girls that deserve to be highlighted and given the requisite attention.

Mrs. Akufo-Addo said it is imperative that women from all walks of life heed the clarion call to continually support women’s tireless efforts at bringing different expertise, experiences, perspectives and skills to the table, and make concrete contributions to decisions, policies and laws that work better for all.

“Call on governments, especially in Africa, to ensure that girls stay in school, irrespective of the extended school closures, and protected from all forms of abuses and early marriages is in the right direction.

Reports of increased violence against women, attributed to the consequences of the pandemic, must be investigated and stopped through proper social counselling and monitoring programmes as well as support services to safeguard our females,” she added.

HONE7 Denies Reports That She Came To Ghana To Support LGBTQI+