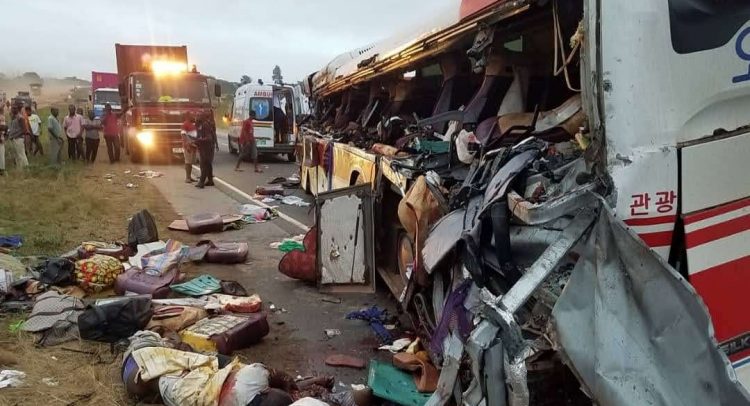 One of the mangled buses after the carnage

The fatal accident occurred at about 5 a.m. at Kyekyewere, near Asuboi in the Ayensuano District in the Eastern Region.

The articulated truck, heading towards Kumasi from Accra, veered into an oncoming lane and crushed two passenger buses both from the opposite direction on the busy Accra to Kumasi highway.

Forty-three (43) others sustained various degrees of injury in the gory accident and the police had confirmed that seven males and seven females lost their lives.

The Burkinabe DAF articulated truck with unusual registration numbers, the head bearing 3339T1 03BF and the trailer 11JL6112 BF and laden with flour and en route to Burkina Faso, according to an eyewitness, reportedly burst a tyre while speeding at Kyekyewere.

The driver reportedly lost control of the vehicle and in the event drove into a Kia Grandbird Bus with registration number GT 4997-20, which was being driven by one Abubakar Fuseini, 40.

A state-owned STC Scania Marco Polo bus with registration number GE 8131-16 following on the heels of the KIA Grandbird and driven by 46-year-old Edmund Kwaku Bonsu was also damaged in the accidents.

The aftermath of the impact was a gory spectacle of decapitated body parts and lifeless bodies, including a child.

It was a motorcyclist, a witness to the spectacle, who quickly made a call to emergency services including the Ghana Police Service, Ambulance Service and the National Disaster Management Organization (NADMO) personnel from which they quickly dashed to the scene as first respondents.

The STC bus driver reportedly did not sustain severe injuries but the KIA Grandbird driver had a serious injury in the leg.

It is still unclear if the driver of the DAF truck that caused the deadly accident has been picked up by the police, but sources say he is still at large.

The dead and injured survivors were rushed to the Nsawam and Suhum government hospitals, with the critical cases referred to the Korle Bu Teaching Hospital in Accra for attention.

When DAILY GUIDE arrived at the scene at about 6:15 a.m., four ambulances from Upper West Akim, Suhum, Nsawam and New Juaben South, all in the Eastern Region, were busily delivering emergency services. All the vehicles involved in the accident were mangled almost beyond recognition.

The Suhum Government Hospital Medical Superintendent, Dr. Kofi Ablorh, later confirmed to DAILY GUIDE that “24 cases were brought to the Accident and Emergency Centre and two were brought in dead so they were sent to the morgue.”

According to him, “two of the injured were children under five years who were treated and discharged. The father of a dead child came and identified his dead child convincingly and so we allowed him to take the body away.”

Dr. Ablorh added that “one case was serious, having suffered injury in the abdomen. He was stabilized and referred to the Koforidua Regional Hospital. Eighteen persons who sustained minor injuries were attended to at the OPD and discharged.”

Nineteen victims were sent to the Nsawam Government Hospital and two referred to the Korle Bu Teaching Hospital.

The dead bodies have been sent to the Suhum Government Hospital mortuary for identification, preservation and autopsy.

The road has since been cleared for the free flow of traffic.

The Suhum to Accra stretch of the highway saw another scene of a bloody accident earlier this month when a commercial passenger bus suffered a locked steering. 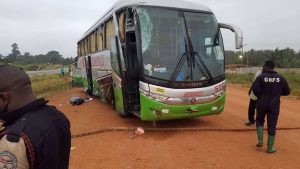 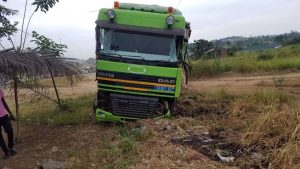