Flowers For The Fallen Cops 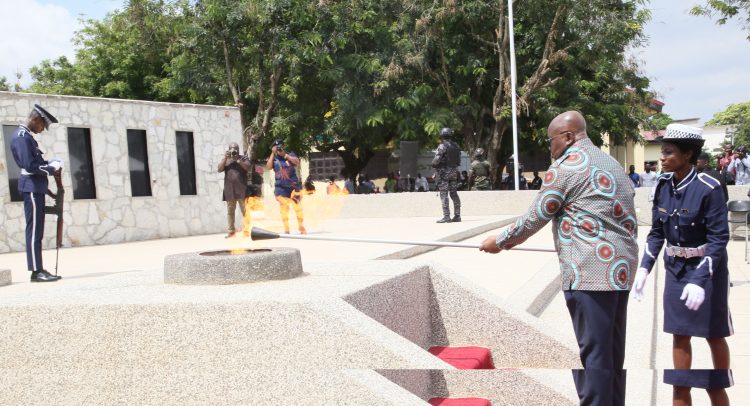 “A country which does not honour its heroes and heroines is not worth dying for” is a widely held dictum. It is a fact indisputable by all standards.

Yesterday, the President, the IGP and security ministers all converged on the Cenotaph Ground of the Ghana Police Service (GPS) at the National Police Depot at Tesano, Accra, to honour cops who lost their lives in the line of duty or better still while serving the country.

The GPS suffered a telling period in its annals between 2018 and 2019. Outright incidents of murder by both armed robbers and hoodlums, including being run over by vehicles in the line of duty, are painful entries in the history of the law enforcement agency which must be acknowledged.

We doff our hats for the originators of the idea of constructing the cenotaph in memory of fallen cops which is a novelty.

The life of a modern cop is not easy. He goes on patrol or even guard duty at the façade of a bank, not knowing what awaits them at the hands of the now sophisticated criminals who sometimes wield similar weapons as do the cops or even better.

Until recently under this regime when the challenge of logistics of personnel is being addressed, there were limited bulletproof vests for cops on field duty. In spite of this situation, we look up to personnel to discharge their duties as supermen even as we enjoy our sleep.

They have been gunned down so harshly that we wonder whether their assailants have space for pity in their hearts. It is regrettable that because we are ruled by law, cop killers are given the chance to defend themselves, with some of the cases lasting even years in some instances. Under the circumstances, we can only keep our fingers crossed as the bereaved families watch in pain the proceedings in the courts.

The compensations in recent times have witnessed marked improvements when juxtaposed with previous years. Vice-President Mahamudu Bawumia who is Chairman of the Ghana Police Service Council during the funeral of the slain policewoman in Tamale announced new packages for the families of cops who die in the line of duty.

We pray that bureaucracy would not stand in the way of bereaved families accessing the compensations. The loss of breadwinners cannot be substituted with monetary compensation, never; but suffice it to state that it can go a long way in addressing the educational needs of the semi-orphaned children.

We salute the President for his consistency in honouring this important date in the calendar of the GPS when it is due.

It is only when police officers know that their services are appreciated by the state and their compatriots that they would enforce the law regardless of the consequences.

For those who have fallen, we at the Daily Guide can only substitute the sounding of the last post with a prayer that Almighty God would grant their souls eternal rest and the fortitude by their dependants to bear the loss; this being the time when the pain returns with a vengeance.