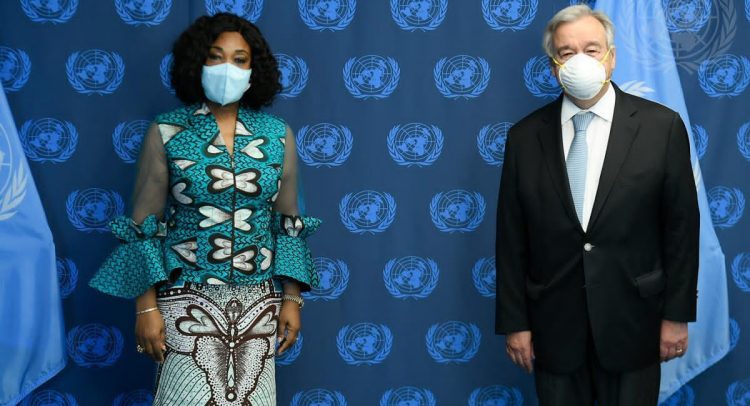 Minister of Foreign Affairs and Regional Integration of Ghana, Shirley Ayorkor Botchwey, has met with the Secretary-General of the United Nations (UN), Antonio Gutterres.

During the meeting they discussed among other issues, Ghana’s vision and priorities for her tenure as a prospective non-permanent member of the UN Security Council.

They also exchanged views on pertinent global challenges, including the situation in the Sahel, particularly Mali.

The meeting on June 8, 2021, formed part of Ghana’s campaign to secure support from Member States for her candidature for a non-permanent seat on the United Nations Security Council.

Madam Ayorkor Botchwey stated that in furtherance of Ghana’s commitment to enhancing global peace and security, she is seeking, for the fourth time, a non-permanent membership of the Security Council for the period 2022-2023.

According to her, Ghana is hopeful of being elected on 11th June, 2021 and has adopted as the theme for her agenda on the Security Council – “Enhancing Global Peace and Security for Sustainable and Inclusive Development”.

She said “the nexus between peace and security, and sustainable and inclusive development, particularly on the continent of Africa, and advocate the need to strengthen the close alignment of the work of the United Nations in those two areas in order to assure a reinforcing effect.”

The Minister mentioned that Ghana intended to leverage her previous and current experience as the Chair of ECOWAS and an active member of the AU to prioritise on the Council the issues of conflict prevention, post-conflict reconstruction, and the strengthening of partnerships between the UN and regional arrangements in dealing with conflict situations.

She seized the opportunity to brief the Secretary-General on efforts being undertaken by ECOWAS to address the security situation in the Sahel and the need to have a sustained and comprehensive approach in dealing with the situation.

According to her, the current deterioration of the situation in Mali was most unfortunate and a setback to the efforts of the international community and the region to restore democracy and rule of law in that country and consolidate the internal military capacity of Mali in the regional fight against extremists and terrorists on the fringes of the Sahel.

On his part, Mr Gutterres welcomes the agenda and priorities set out by Ghana as enumerated by Ghana’s foreign minister which, according to the Secretary General, should resonate strongly with all UN member states.

He applauded the President of Ghana Nana Akufo-Addo, as the chair of ECOWAS for his efforts at mediation to resolve the crises in Mali.

He confirmed that ECOWAS, under the chairmanship of the president of Ghana, had taken the right approach with addressing the conflict in Mali.

Call Off Industrial Action And Appear Before Commission-Labour Commission