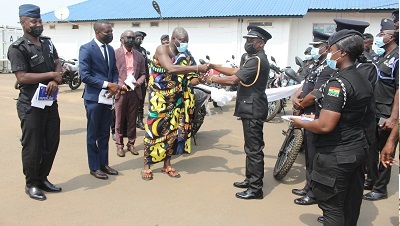 The motorbikes, according to the company, are to augment the existing number of motorbikes being used by the service for patrol duties.

Making the presentation at the headquarters of the FPU in Accra, Daasebre Kwebu Ewusie VII, Board Chairman of COA Research and Manufacturing Company, said as part of their corporate social responsibilities, the Board and Management have decided to present to the Police Service a total of 20 motorbikes to aid in their ongoing community visibility initiative.

He said having considered the various initiatives embarked on by the Police Service under the leadership of Dr. George Akuffo Dampare, management of the company thought it wise to support in their own small way towards the maintenance of the peace being currently enjoyed in the country.

“The Police Service is the foremost institution when it comes to maintaining peace and order in this country. Though government is doing all it can to provide the necessary resources required to maintain the peace, it is equally the responsibility of businesses operating under the peaceful atmosphere to also contribute their quota in that direction,” he stressed.

He said, “COA Research has received a lot of support from Ghanaians over the period and we believe one of the ways by which we can give back to society is to invest in initiatives that will return the benefit to the general society.

“We have seen your good works. Continue to provide your services to our people. On our part, we assure you of our commitment and support in the coming days to serve as motivation to the personnel.”

The Director-General in charge of Services, Deputy Commissioner of Police (DCOP) Mr Enoch Adu-Twum Bediako, who received the motorbikes on behalf of the Police Administration, said Dr George Akuffo Dampare extends his sincere appreciation to COA Research for their kind gesture.

He promised to use the motorbikes in the interest of Ghana.

“The Ghana Police Service has been doing a lot in terms of community policing and patrols.

“The citizens will attest to this fact. We are not praising ourselves. We know that together, we can fight crime within our locality and reduce it to its barest minimum since crime fighting is a shared responsibility,” DCOP Adu-Twum Bediako stated.