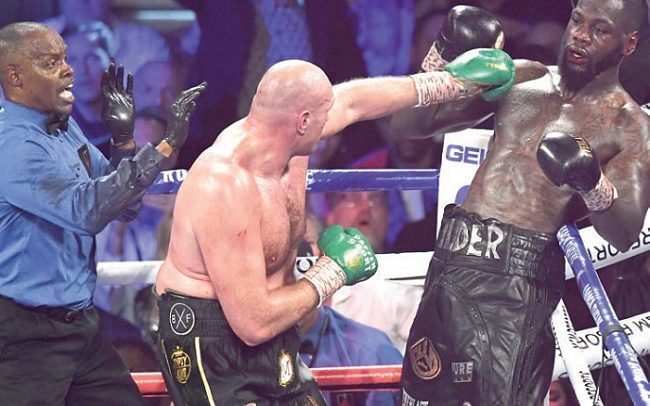 Britain’s Tyson Fury delivered a dominant performance in his heavyweight championship bout with Deontay Wilder on Saturday, overwhelming his opponent to earn a seventh-round TKO victory in Las Vegas.

In the highly anticipated super fight rematch between the two titans, Fury took control late in the first round and never relinquished it, knocking Wilder down twice and bloodying him en route to the referee stopping the fight in the seventh, where Wilder’s corner threw in the towel.

Fury used his reach advantage to continually beat Wilder to the punch. He took total control in the third where he landed a right hand to Wilder’s left ear to drop him to the canvas.

Wilder never regained his legs or footing after that, wobbling through the rest of the match.

Fury again dropped Wilder in the fifth with a body punch and then caught him in the corner with a flurry of punches in the seventh where it ended.

After the fight ended, Fury took the microphone in the ring and tried to get the crowd to sing along to American Pie with him.

“Even the greatest have lost and come back,” Wilder said.  “I make no excuses. This is what big-time boxing is all about.”

Wilder, who at two metres tall (six feet, seven inches) and 105kg (231 pounds) was the smaller man in the ring to the 2.05-metre (six feet, nine inches) British giant, was backpedalling the entire fight, trying to catch Fury coming in with a right hand. But he was never able to throw it effectively, and unable to deal with Fury’s jab.

Two judges had Fury winning every round, while the third gave Wilder one round. Fury had a point deducted for grabbing and pushing in the fifth round.

“He manned up and he really did show the heart of a champion,” Fury said.

“He’s a warrior, he will be back, he will be a champion again. But the king has returned.”

NAPO, Adwoa Safo Not Awarded Scholarships Under Our Administration – GETFund