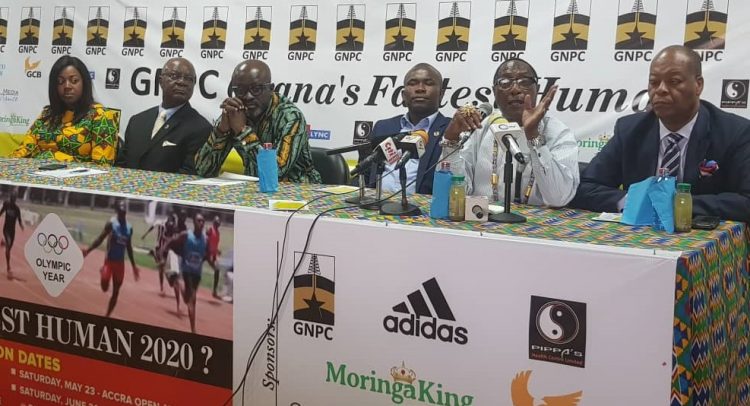 Dignitaries seated on the high table during the launch

It has made major strides since its inception close to 10 years, producing fine sprinters who have chalked up remarkable successes for their respective schools and country ‒ both locally and internationally.

Special Adviser to the  Youth & Sports Minister, Emmanuel Owusu Ansah, at this year’s launch held recently promised to be involved in the selection of athletes to represent Ghana at international competition and offer them scientific training to excel like other world-class stars from Jamaica and Kenya.

Secretary to the President of the Republic of Ghana, Nana Bediatu Asante, who was the special guest of honour, commended Reks Brobby, founder of GFH, for the initiative aimed at restoring sprints in schools and ultimately raising a team to represent Ghana in this year’s Tokyo Olympics. He made a clarion call to all to rally behind the concept till Ghana gets an Olympic medal in sprint events.

He noted that the GFH initiative is a public private partnership initiative, and urged all to contribute to its success.

He commended companies like GNPC and GCB for supporting the initiative.

GNPC’s Corporate Affairs Director, Carmen Bruce-Annan, and Anslem Ray Sowah, MD of GCB, in separate words lauded the initiative and expressed the hope that Ghana would once again rule the tracks like they did at the 1954 Commonwealth Games.

The Paramount Chief of Agomeda, Nene Nagai Kasa VIII, who chaired the function, called on Ghanaians and companies to support the Ghana Fastest Human programme.

Brobby, who turned 59 years last Friday, was optimistic Ghana would return home with a medal from the 2020 Olympics.

Meanwhile, six young local athletes have been selected for the 2019/ 2020 GNPC Speedsters Club.

This year’s makes it the fourth batch to be inducted into the Speedsters Club.