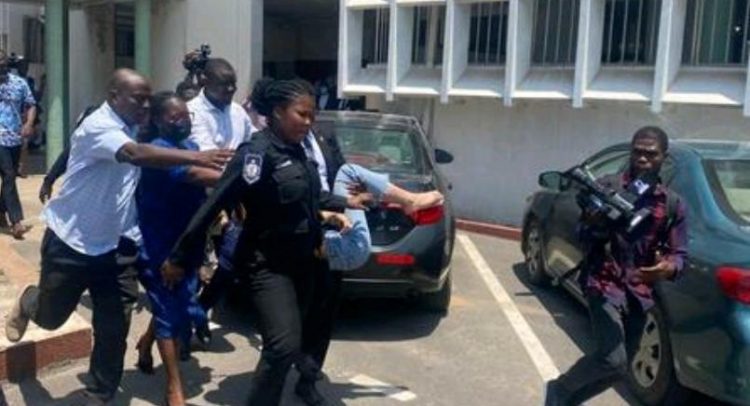 An Accra Circuit Court yesterday turned down a motion for bail filed by lawyers for Huang Ruixia aka Aisha Huang, and three other Chinese nationals standing trial for engaging in illegal mining, popularly known as galamsey, in the Ashanti Region and thus extending their remand in police custody.

Aisha Huang, a galamsey kingpin who was deported in December 2019 for a similar offence, was re-arrested two weeks ago for crimes related to the sale and purchase of minerals without licence as well as illegal mining, which has become a menace in the country’s mining areas.

Court documents say she was arrested in 2017 for a similar offence but managed to sneak out of the country, thereby averting prosecution. It adds that she managed to sneak back into the country this year after having changed the details on her Chinese passport, and resumed her illegal mining business upon her return to Ghana.

Her accomplices Johng Li Hua, Huang Jei and Huaid Hai Hun are each facing one count of engaging in sale and purchase of minerals without valid licence contrary to Section 99(1) of Minerals and Mining Act.

Captain Nkrabeah Effah Dartey (Rtd), Counsel for Aisha Huang, Huang Jei and Huaid Hai, told the court that it could not be true that Aisha Huang was deported from the country in 2019 as being claimed, as there had not been an Executive Instrument declaring her a persona non grata, which could have led to her deportation.

He said all Ghanaians as well as foreign nationals living in Ghana are protected by the country’s constitution, and the constitution presumes the accused persons innocent until they are found guilty by the court.

He urged the court to grant the accused persons bail, stating that granting them bail will send a signal to the rest of the world that the judiciary in Ghana is on its feet and is applying the law.

He added that the accused persons had been remanded for two weeks, and wondered why the prosecution could not conclude their investigations on what he described as “small, small charges.”

The prosecution led by Detective Chief Inspector Frederick Sarpong, opposed the application, indicating that other suspects have been arrested in connection with the case, and in the interest of the public, a thorough investigation ought to be conducted into the case without any hinderance.

He said the accused persons, if granted bail, will interfere with police investigations and witnesses, adding that the accused were put before court for their involvement in a criminal offence, and not because of their nationality.

He added that Aisha Huang, in particular, will distort investigations if granted bail, as she could not even tell the court how she re-entered Ghana after her deportation.

The presiding judge, His Honour Samuel Bright Acquah, in his ruling held that Aisha is a well-known galamsey operator, and that she had gained notoriety as a galamsey kingpin in the country.

He said Aisha Huang will not appear to stand trial and may interfere with evidence as well as hamper the trial if granted bail.

He said the accused sneaked out of the county and is said to be influencing some bigwigs in the country, adding that considering the punishment that comes with a conviction in the trial should they be found guilty – GH¢360,000 or 20 years’ imprisonment, he declined the application for bail and further remanded the accused persons.

One of the accused persons, Johng Li Hua, collapsed during the proceedings and had to be rushed to the hospital.

The accused had appeared dizzy while standing in the dock. The court then gave her permission to sit down, but in the course of the proceedings, she fainted and an officer rushed her into a vehicle to the hospital.

No Water For Fans... At World Cup Trial