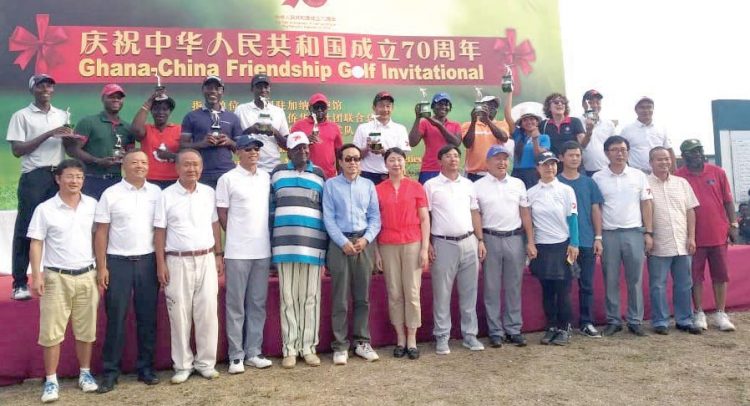 Winners and officials in a pose after the event

A spirited display of swings handed Zhang Don Gjun the ultimate prize in the Ghana-China Friendship Golf at the Celebrity Golf Club, Sakumono, on Saturday.

He recorded 43 points after beating Stephen Afari by two strokes to run home with a trophy and other souvenirs. Felix Antonio finished in third place with 40 points.

It was Jenny Lee, who won the ladies category after posting 35 points, while Mercy Werner and Christine Furler followed in that order with 34 and 31 points respectively.

A 42 point handed the Group B top prize to Maxwell Ababio, with Yao Asumanh, 38points and Randy Adu 38 following in that order.

Gladys Awuni left the event commemorating China’s 70th anniversary of the founding of People’s Republic of China as the nearest to the pin winner, while Mercy Werner picked the longest drive prize. Jerry Tetteh won the male’s category.

The captain of the Ghana China Golf Association, Wang Shu, said, “Indeed, the large presence of golfers from far and near, no doubt has made the anniversary celebration worthwhile.”

The Chinese ambassador to Ghana, Shi Ting Wang, was among the high-profile personalities who graced the event.