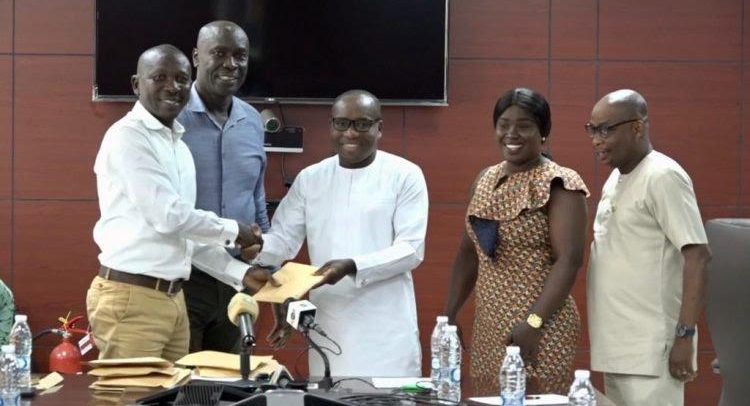 The Ghana National Gas Company has supported nine Metropolitan, Municipal and District Assemblies (MMDAs) in the Western Region with a total amount of GH¢180,000 towards the assemblies’ local celebration of this year’s Farmers’ Day.

The beneficiary MMDAs who received GHS 20,000.00 each, are within the operational areas of the gas processing company.

Stephen Donkor, Senior Manager, Community Relations and Corporate Social Responsibility (CSR) of Ghana Gas handed over the cash to the Assemblies at a brief ceremony at A.B Bokazo in the Ellembelle district.

He explained that the donation was the company’s contribution to encourage and support the country’s hardworking farmers to help increase food production.

He noted that Ghana Gas was ready to engage the assemblies to know how they could collaborate to improve the agricultural sector in their respective areas.

“For instance when it comes to planting for food and jobs, the company wants to engage the assemblies to know the kind of support it could offer to make the policy very successful”.

“Now the Minister of Agriculture is sending foodstuffs to the ministry and other areas for people to go there to buy. So we want to know as an organization what can we do to support this initiative”, he stressed.

He pointed out that Ghana Gas would also want to do something monumental that would benefit the people even after oil production in the region had ceased.

Speaking on behalf of the Chief Executives of the nine districts, Kwasi Bonzoh, Ellembelle DCE, thanked the gas processing company for their consistent support to the assemblies.

He was very hopeful that the donation will go a long way to cushion the assemblies to also appreciate the hardworking farmers in their respective areas.

He promised that the chief executives would let the farmers know the kind of support Ghana Gas has offered them, during the celebration.

Kwasi Bonzoh mentioned that the Ellembelle District Assembly will honour 22 farmers with various awards at the 38th Farmer’s Day celebration on Friday.