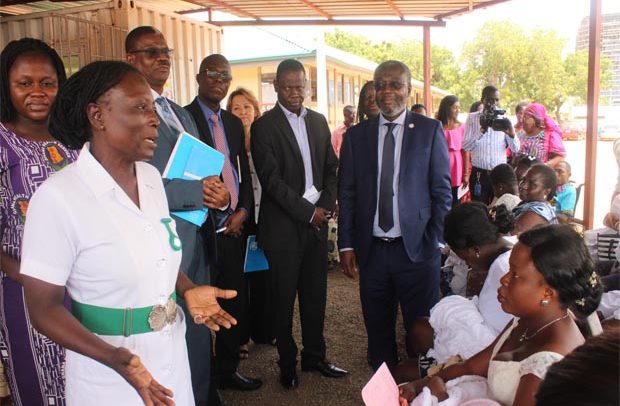 Fifty-six per cent of all new born in Ghana are put to breast within the first hour of birth, the World Health Organisation (WHO) has said.

This figure, according to the WHO, is slightly higher that the regional average of 50 per cent and the global average of 42 per cent.

It is in light of this that the Ghana Health Service (GHS) and its partners in public health, the United Nations Children’s Fund (UNICEF) and the WHO Ghana office are calling for an improved exclusive breastfeeding rate nationally.

“Scientific evidence support the fact that exclusive breastfeeding is the most optimal infant and young child feeding option and in line with recommendation by the global public health community, led by UNICEF, WHO,” he said.

Dr Nsiah-Asare maintained that the GHS has, over the years, rolled out key actions focused on ensuring that women receive the support to exclusively breastfeed their babies.

“We are implementing the baby friendly hospital initiative, undertaking capacity training and development for health professionals as well as organising postnatal clinics and well baby clinics across the country,” he added.

Dr Nsiah-Asare, however, agreed that challenges, including inadequate information about breastfeeding, poor support from spouses, family members and work environment and aggressive actions by breast milk substitute companies are hindering the scale-up of the initiative to the national target.

The WHO Country Representative, Dr Owen Kaluwa, in his remarks called for the implementation of key policy actions in order to improve breastfeeding in the country.

He called for increased funding to strengthen, promote and support breastfeeding practices, enhance quality of care in facilities in support of early initiation of breastfeeding as well as skilled breastfeeding counselling.

“Fully implement the international code of marketing of breast milk substitutes and other World Health Assembly resolutions through strong legal measures that are enforced and independently monitored by organisations free from conflict or interest,” he added.

“We must urgently scale up support to mothers – be it from family members, healthcare workers, employers and governments, so they can give their children the start they deserve,” she said.