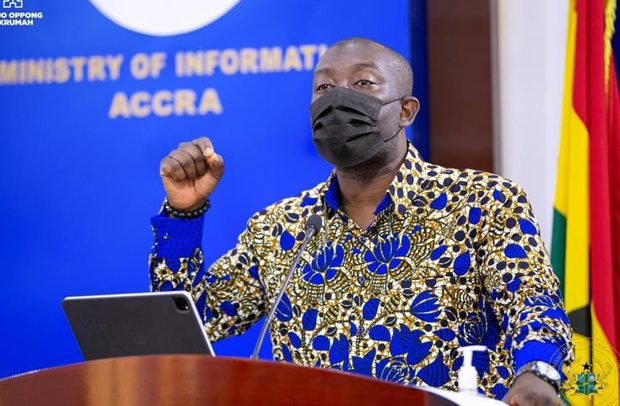 According to him, despite the challenges posed by the coronavirus pandemic, the Ghana Investment Promotion Centre (GIPC) was able to attract about 279 FDI projects to Ghana.

Mr Oppong Nkrumah said $145 worth of investments was recorded domestically in 2020.

“The FDI component and local components from these investments amounted to US$2,650.97 million and US$145.52 million respectively for 2020.”

“The total initial capital transfers recorded for the period also amounted to US$75.91 million.”

“The investments recorded in 2020 have prospects of generating a minimum of 27,110 jobs with operations at full capacity. In the year under review Ghana recorded among others, significant projects by Toyota Tsusho (automobile), Sentuo Oil Refinery (refining crude oil), One Rand Group (manufacturing of real estate material) and African Underground Mining Services (mining support services).”

He said the revenues were raised from manufacturing, services, mining and general trading.

On the FDI, the Minister said the highest amount of money came from China, about $750 million.

About $138 million FDI was attracted from the Netherlands, according to him.

He stated that Ghana attracted $1.2 billion through manufacturing.

Out of the 279 FDI projects, he said 31 projects were in the Western Region, and three in the Volta Region.

“Out of the 279 projects registered, the services sector, with 184 projects, recorded the highest number of projects. It was followed by manufacturing with 57 projects. Export trading, General Trading and Building and Construction recorded 15, 10 and 5 projects respectively. “

“The mining and petroleum sectors recorded 3 projects each and agriculture and liaison recorded a project each. In terms of the FDI values, the manufacturing sector recorded the largest value of US$1,270.53 million.”

“This was followed by the services, mining and petroleum sectors with FDI values of US$656.19 million, US$424.32 million and US$222.55 million respectively. The details are provided in figures 2a and 2b above.”

“The Ghanaian economy is witnessing continued improvement with the implementation of sound monetary and fiscal policies in the face of the COVID-19 pandemic.”

“The economy has grown by 1.9% and inflation has been brought somewhat under control in spite of the global decline. Ghana’s position as one of the safest and most stable countries on the continent has been deepened with government regaining the mandate of the Ghanaian people through successful elections in the last quarter of 2020.”

“The Secretariat of the African Continental Free Trade Area (AfCFTA) has been commissioned in Accra amidst the pandemic, serving as a major landmark in the full implementation of the free trade agreement. These have boosted investor confidence in Ghana.”

771 Persons Die from Coronavirus in Ghana