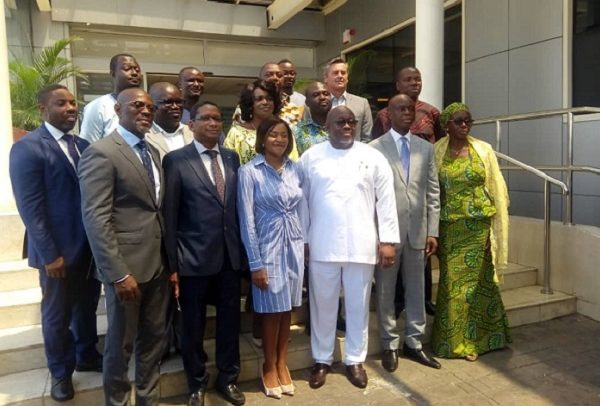 Mr. Anokye (second right), the Deputy Minister (third right), Mr. Sakyi-Addo (first left) in a group photo with other participants after the opening session of the workshop

GHANA HAS joined the rest of the world in the celebration of 50th anniversary of the World Telecommunications and Information Society Day (WTISD).

This year’s WTISD celebration took place on Friday, May 17, in Accra, under the global theme: ‘Bridging The Standardization Gap.’

The flags of Ghana, United Nations and the International Telecommunications Union (ITU) were hoisted at the forecourt of the National Communications Authority (NCA) tower – located within the Kotoka International Airport enclave – signify solidarity.

It was aimed at raising global awareness about the importance of standardization of telecommunications technologies.

The celebration organized by the NCA was also aimed at encouraging the implementation of international standards in Ghana’s communications sector to bridge the digital divide.

Speaking at a workshop on Friday in Accra as part of the celebration, the Director General of the NCA, Joe Anokye, reiterated that over the last few years, the Authority had invested significantly in technical monitoring equipment to enable the NCA play its regulatory role and ensure compliance of all required QoS Key Performance Indicators (KPIs).

Among the equipment acquired, according to the Director General, were a Network Monitoring System and a Nemo Quality of Service System for drive tests.

As a result, the Deputy Minister tasked the NCA to work closely with mobile network operators in the country “to determine the level of potential risks we may have as regards the prevalence of fake or substandard mobile devices on the market.”

Mr. Andah revealed that the Government of Ghana through the Ministry of Communications would not hesitate to disconnect counterfeit mobile phones from use “since the health of consumers is important.”

The Deputy Minister also called on stakeholders in the domestic telecommunications sector to collaborate in the fight against cyber crimes.

The need to bridge the Standardization Gap globally is a fundamental aspect of the ITU’s mission to connect the world on the ICT ecosystem.
Board Chairman of NCA, Kwaku Sakyi-Addo, reading a statement on behalf of ITU Secretary General, observed the need for every nation to recognize that it has a role to play in ensuring that telecommunications technologies were not used to incite violence.

He called on global stakeholders to commit to working together in ensuring that digital technologies deliver for all.