Ghana To Open Consulate In Budapest 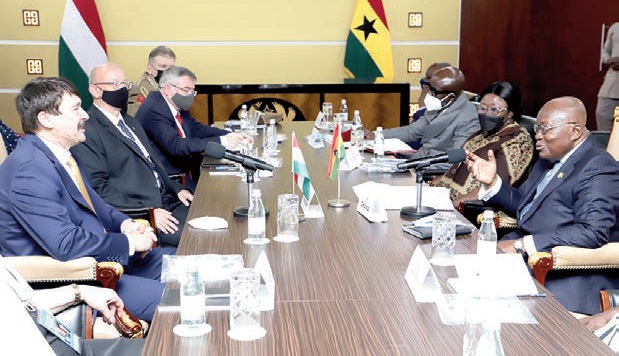 The government has declared its intentions to open a consulate in Budapest, Hungary soon.

This is to facilitate trade and political relations between the two countries; Ghana and Hungary.

President Akufo-Addo made the commitment when he hosted the visiting Hungarian President, Jànos Āder at a dinner on Thursday evening.

Hungary was one of the first Socialist countries in Europe to establish a diplomatic mission in Ghana in 1961. However, it closed its mission in 1989 and after about three decade.

It was reopened in April 2016 and Vice President Bawumia later commissioned it on December 1, 2017.

Before proposing a toast, President Akufo-Addo said Ghana will follow through with its plan to open her embassy in Hungary.

He said with the visit of the Hungarian leader to Ghana, he is looking forward to a strong partnership between the business communities of the two countries to boost trade and economic relations.

“With your visit, I am confident that a strong foundation for a new and mutually beneficial cooperation has been laid and I am expectant that the contact between our two business communities will yield the necessary fruit of enhanced private exchanges between Ghanaian and Hungarian business people,” Akufo-Addo said.

On his part, President Āder was impressed by the assurances of President Akufo-Addo that Ghana will be re-opening her embassy in Budapest soon.

“This morning Mr. President, I forgot to ask you when you will be opening an embassy in Ghana as a reciprocal gesture to ours, but I heard you saying you will do so soon. Without me asking, you delivered,” President Jànos Āder said.

The Hungarian President together with his wife, Anita Herczegh, as part of their state visit to Ghana, were received at the Jubilee House by President Akufo-Addo and first Lady Rebecca Akufo-Addo, after inspecting a guard of honour mounted by a detachment of officers and ratings of the Ghana Navy at the forecourt of the Jubilee House in Accra.