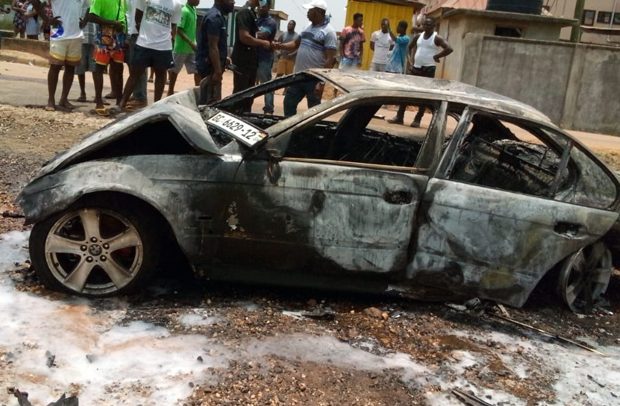 The police man’s vehicle that was totally burnt

A 10-year-old female hawker was killed on the Kansaworado-Anaji Highway in the Effia-Kwesimintsim Municipality of the Western Region by a policeman who was allegedly pursuing a tanker car which had reportedly committed a traffic offence.

The unfortunate incident occurred at about 9am on Easter Monday, April 5, 2021.

The policeman, who was chasing the tanker driver in a private car, reportedly lost control and in the process knocked down the little girl, killing her instantly.

The policeman was allegedly chasing the tanker car that had allegedly jumped traffic when the freak accident occurred in front of the Latter Rain Church in the municipality.

Eye witnesses told journalists that the body of the little girl was mutilated, saying, “The entire limbs of the girl were smashed and she died instantly.”

They said what made the accident strange was the fact that the private car that the policeman was driving after hitting the girl suddenly caught fire and totally got burnt.

According to the eyewitnesses, the policeman, who had sustained serious injuries, was rescued and was rushed to the hospital.

Some policemen visited the scene and conveyed the body of the little girl to the morgue, and the tanker driver who outwitted the policeman, leading to the accident, is being pursued by the police.

The Western Regional Commander of the Motor, Traffic and Transport Department (MTTD), Chief Supt. Isaac Kwesi Sorkpah, who confirmed the incident, assured that the case would be fully investigated.

He revealed that the suspect driver is a police officer but not from the MTTD, and that he had not been assigned any duty at the time of the accident.

He said the policeman who was in a mufti was driving a private car at the time of the accident, adding, “There is no evidence that he was chasing another car.”

He said the police found some burnt notes of monies in the policeman’s private car, adding, “For now the policeman is in a critical condition at Effia-Nkwanta Hospital.”