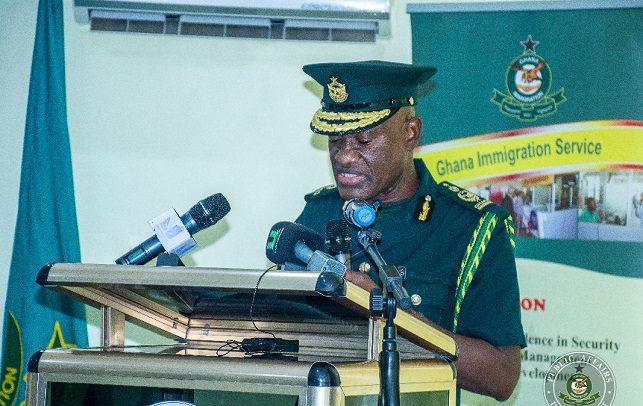 Kwame Asuah-Takyi, Comptroller General of the GIS addressing the gathering

THE GHANA Immigration Service (GIS) has held a day’s sensitisation workshop for members of the National Immigration Management Committee and Regional Commanders of Immigration on the National Security Strategy, a framework for ensuring the overall peace and security of Ghana.

President Akufo-Addo, in June this year, launched the National Security Strategy – a security manual aimed at optimising the effectiveness of the security and intelligence sector by revamping current systems and structures while prioritising the effective use of resources to promote effective decision-making, through an institutional system that will ensure integrated and efficient coordination in all spectrums of national security.

Opening the programme, the Minister for National Security, Albert Kan Dapaah said “the survival of Ghana in the wake of a surge in terrorist infiltration, cross-border crimes and movement of goods and people along unapproved routes would largely be dependent on the extent to which officers of the Ghana Immigration Service carry out their responsibilities.”

Comptroller-General of the GIS, Kwame Asuah-Takyi, highlighted the need for cooperation and collaboration among the various security agencies to combat terrorism, insurgency and other forms of crime in and at the borders of the country.

“The goal of the National Security Strategy which contains the blueprint to enable agencies within the National Security architecture to effectively deal with existing, new and emerging threats to the country has what it takes to give us a secured environment that guarantees the safety of the people and territorial integrity for a sustainable development as espoused by the President,” he said.

“It’s no gainsaying that the ultimate goal of the security strategy is the well-being of the people. If Ghana will continue to be that oasis of peace within the sub-region, then it behooves all, both security and citizens, to strictly adhere to this strategy,” he stated.

Deputy Minister of the Interior, Naana Eyiah, said there was the need for all stakeholders to have deeper understanding of their roles in the implementation of the strategy, saying, “It is only when the citizens are enlightened about the contents of the strategy that they can effectively play their roles in ensuring that the objectives of the National Security Strategy are achieved.”

She indicated that the GIS has seen “tremendous improvement” in infrastructure and logistics, including an enhanced recruitment levels that has doubled the human resource base of the GIS in the last four years and led to improvements in border management and control.

She also said visibility at most of the unapproved routes has been enhanced to check irregular migration.

“The government is determined to do more to improve upon the operations of the service and make it a very strong and viable institution to protect our borders and keep us all safe from miscreants and extremists. It is the hope of my Ministry that the GIS will be in a better position to effectively support in the implementation of the National Security Strategy,” she said.