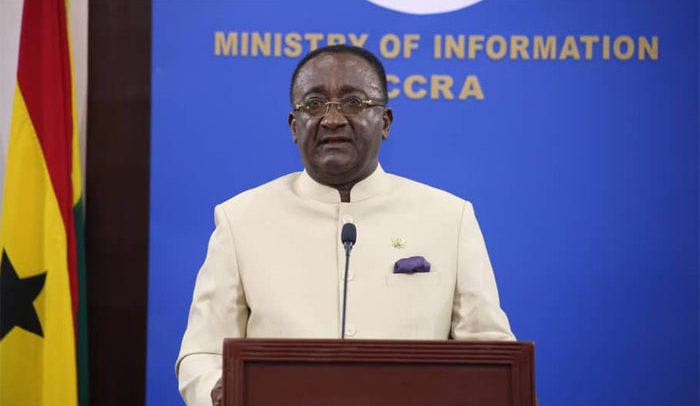 I have just finished consuming my fufu and tilapia soup.  I did not need any money to buy anything because everything I needed was on my farm.  I have a small fishpond where I planted fingerings of tilapia and they are matured for eating. As for plantain and cassava, I have enough to sustain my family even if the 1983 famine, which nearly brought the country on her knees, happens today.  As I sat by my computer to compose this week’s article, what came to mind was to thank you, the Minister of Food and Agriculture for intruding the Planting for Food and Jobs programme.

I know you will not get enough time to read this piece but what I know is that somebody else will read and tell you the story.  You are busy working to feed the nation and creating jobs for the youth in particular who live in the rural area. I therefore do not blame you for not reading this piece.  When you mooted the idea of planting for food and jobs, I started referring to you as Joseph the dreamer.

The late General Kutu Acheampong of blessed memory had similar dreams which led to the introduction of Operation Feed Yourself (OFY).  The programme was so successful that food became abundant in Ghana  and as such, there was no need to import food. In anyway, General Acheampong had decreed that Ghana was not going to pay any debt that we owned to any foreign country (Yentua).  For that reason no country was prepared to give Ghana any loan.

General Acheampong saw the success of the OFY and went further to introduce Operation Backyard Gardening. This programme too became so fashionable that wherever you went in the big cities and towns, you could see backyard gardens. Bankers, businessmen and women and a cross section of the populace got involved.  Crops like cocoyam, garden eggs, tomatoes, pepper, plantains etc could be seen at the backyard of people who lived in the cities and towns.  I do not know if the Minister of Food and Agriculture ever stayed along the coastal towns like Takoradi, Winneba, Cape Coat Saltpond, Axim, Secondi etc.  During the days of Acheampong, fisher folks experienced such a bumper catch, especially, herrings to the extent that fishmonger became tied of drying them and since there were no cold stores in those towns to store them, fishermen had to sail back to sea with their catch of the day to jettison them in the blue sea.  That was the mistake that the government of Acheampong did,

They did not foresee the need to save for the rainy days as the ant does.  As we trudged on and enjoyed the abundance of fish, another spice called “Ewura Efua” entered our territorial waters and consumed all the fishes.  That was when we realized how stupid we were for leaving the Tema Food Complex Cooperation to lie idle while fishes rot along our beaches.  ‘Minister One’, as an Asante man, I sincerely know you remember those days when Acheampong introduced the OFY. In the Ashanti, Western, Eastern and Brong Ahafo regions plantain became so abundant and as you travelled along the road leading to Accra, the commonest thing you saw were lorry loads of plantain packed at the shoulders of the roads, rotting away because the trucks had broken down.

Barely three years into the introduction of the Planting for Food and Jobs, only Yaanom have failed to see the success story of the programme.  As for Yaanom anything good that comes the way of Ghanaians is abominable. They hate any success of the Nana Addo-led government because the success of any programme will push them further into the dustbin of history.  I have had cause to repeat in this column that it is not for nothing that historians always look back.  One must always look back before he or she leaps forward.  We must learn the mistakes of General Acheampong and stand on the good foot. Today, apart from the women who fry plantain chips which could take days before they go bad, the bumper harvest of plantain and other food crops that we are experiencing will come to nothing if we do not find a way of storing green plantain.

All that we are doing today in the face of the bumper harvest of plantain is to export raw plantain to Ivory Coast, Burkina Faso and other sub-Saharan countries.  This idea of finding a way of storing food reminds me of the role of the University of Science and Technology.  More than 60 years of establishing the university I am yet to see any technology that they have invented to store our raw foodstuffs.  All that they have been able to do is to invent a machine that can grind fufu.  Meanwhile even illiterate mechanics at Kumasi Magazine can do same, if not better.

The sad story is that the KUNST trains engineers who cannot even make roads.  In fact, if their cars break down they take them to a fitting shop to be fixed by illiterate mechanics.  Are these researchers and academics at the KNUST telling me that for all these years they have not been able to do something that can turn things around as far as storage of our raw food is concerned? I know this my suggestion is going to meet sharp criticism but your irrepressible Earth Angel Gabriel don’t give a dime because when the sea if rough the fishes don’t mind.  The Asian Tigers have taken a quantum leap forward because their universities of science and technology are kicking and inventing modern technologies.

I want to use this opportunity to appeal to the Minster of Food and Agriculture to convene a meeting of agronomists and other scientists of the country and possibly those from abroad, to help us out.  Unless we find a way out of this quagmire it will be too late to say we are sorry and future generations will write our names in bronze.  I remember a certain company in Ghana produced Neat Fufu which was sold in our supermarkets but because the adverts did not go well, many Ghanaians especially the working class, still pounded fufu in mortars.  With the introduction of One District One factory, I expect the Minister of Food and Agriculture to invite this company to see the way out.

During the days of Professor Kofi Abrefa Busia and Acheampong, the Wenchi Tomato Factory was producing canned snails, mushroom, palm nut soup and tomato puree. Dr. Kwame Nkrumah established the Bolgatanga meat factory which was producing corn beef, The Volta Corn Beef which was more delicious than Exeter Corn beef, which is too salty.  Ever since that factory went dead no government ever thought of revamping the factory.  The factory was sited at Bolgatanga because the Upper and Northern regions were into cattle rearing.  Additionally our neighbors in Burkina Faso, Mali and Niger are also into cattle rearing.  The raw material for the factory was readily available.  Can’t we look for a strategic investor to revamp that factory so that we can stop the importation of corn beef?

I do not want to revisit the many factories that have been sold out to cronies by Rawlings’ (P)NDC because it will be like raking an open wound with a serrated sword . The Minister of Food and Agriculture should carefully look into these my proposals, strike his mental delete bottom and move forward.   He should stay focused because it is doable.  In the days of Dr. Kwame Nkrumah, the Ministry of Agriculture was more important than even the Ministry of Finance.  In those happy days, anytime you tuned in to Radio Ghana, all that you heard was a music titled “Work and Happenings”.   We had the Farmers Council and the Workers Brigade. Life was fine, very fine.  The current Minister of Food and Agriculture can bring the smile back to our faces one more time from the way he has started.  My prayer is for the Lord of Abraham to put his feet on the right path. It is not for nothing that they say a soldier marches on his belly. Excuse me, while I go on my farm to continue preparing my land for the major farming season.