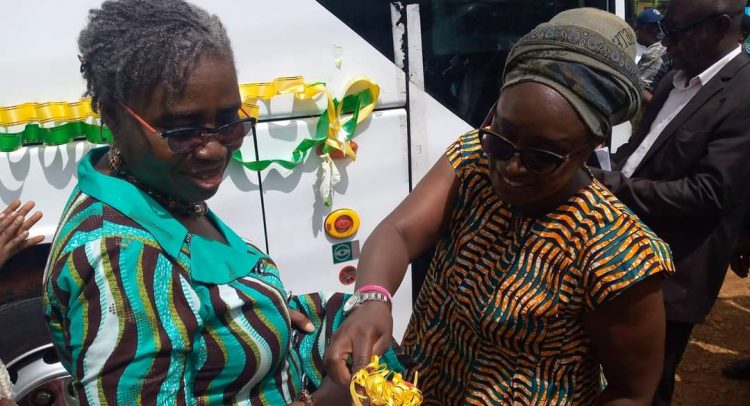 The Member of Parliament for Abuakwa North in the Eastern region and Deputy Minister of Education in charge of Technical and Vocational Education and Training (TVET), Gifty Twum-Ampofo has presented a brand new 64-seater bus to the Saviour Senior High School at Osiem on the 1st of July, 2022.

The presentation, she said, is part of the Nana Akufo-Addo-led New Patriotic Party’s (NPP) administration to resource second cycle institutions to improve education for the socio-economic development of the country.

She said during the short ceremony, that her heartfelt gratitude to the Headmistress of the school, Dr. Hawa Adusei, for the reception given her despite their political differences. 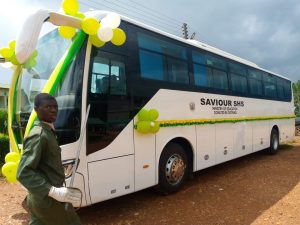 “It’s a pleasure to be here at Saviour Senior High, what has gone on this morning, I will say Dr. Adusei, I’m grateful. For the few things, I have been able to do for Saviour Senior High.
Yes, I am a politician, I belong to the NPP fraternity and I am an NPP MP.
Generally, Saviour is known to be NDC but, you are all Ghanaians. I am a Christian and have a responsibility, one, to the Lord most high and the Holy Spirit, then to all other people, so as a Christian and a Methodist, I see my tenure of office as an MP as a Steward of Christ and as such, I always make sure that, whoever comes my way, to the best of my ability and the mercies of God, I give to those God wants me to bless them to honor His grace,” Gifty Twum-Ampofo stated.

She stated that, though votes she acquires from Saviour enclave are nothing to write home about, her stewardship to them is always paramount through the president and the education ministry to the glory of God.

Gifty Twum-Ampofo recounted how she has always lobbied for Saviour Senior High School as an MP.

It would be recalled that, Gifty Twum-Ampofo lobbied for a brand new Toyota pickup, industrial sewing machines for the vocational department, and six hundred (600) pieces of mono desks.

She admonished them to help secure her in office and added that “To whom much is giving, much is expected”.

The Municipal Chief Executive, Alhaji Umar Babs Bodinga, who was part of the entourage also stated that he has always been a friend to Saviour SHS since he was one of their suppliers from Ghana Buffer Stock.

He added that he promised the school’s Administration of government support for a bus before the end of the year 2022. The promise has seen the light of day.

He continued that, together with the Member of Parliament and the government, a lot will be achieved for the socio-economic development of the Municipality.

Receiving the bus for onwards transfer to the school’s Administration was Abena Gyamena, the Municipal Director of Education.
She thanked the Member of Parliament for her powerful lobbying skills that have led to the acquisition of the bus and promised that the bus will be put to good use.

She further admonished the students not to use blades to cut the seats and avoid any activity that will destroy the bus whenever they are on board.

Saviour Senior High School is a government-assisted day and boarding, according to the headmistress, Dr. Hawa Adusei.

She said the school’s population stands at 2,165 with a staff strength of 146.