Gov’t Hands Over 100 Buses To Schools 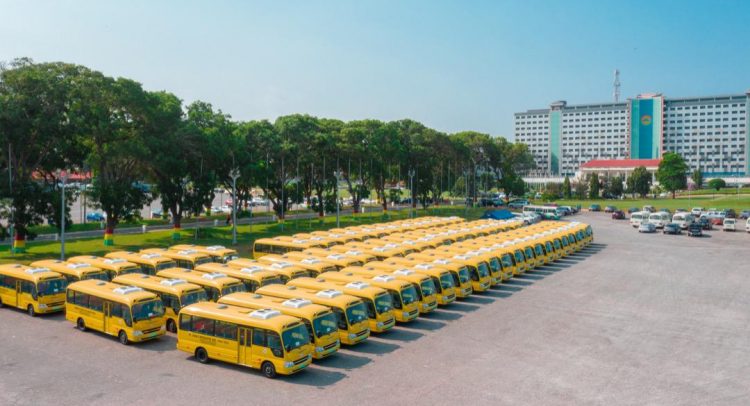 Government has handed over 100 buses to senior high schools in the country.

The buses were handed over in fulfilment of a promise made in March 2020 during the handing over of 365 Isuzu Double Cabin pickup trucks out of a total of 840 procured, which were distributed to all Metropolitan, Municipal and District Directorates of Education, as well as selected agencies under the Ministry of Education. Government also in March handed 493 out of a total 2,000 motorbikes that have been procured to aid the work of circuit supervisors and to further enhance their supervisory roles in the education sector.

Speaking at the forecourt of Parliament on Thursday, July 30, 2020, to hand over the buses, Vice President Dr. Mahamadou Bawumia, reiterated government’s commitment to investing in the education of Ghanaians to make the country more responsive to the needs and challenges of the 21st century.

The Vice President declared that President Akufo-Addo believes that the significant educational reforms that his government has rolled out since 2017 will come to nothing if we do not provide the necessary logistical support for our schools to run effectively as they deliver their mandate for the Ghanaian child.

“This government will continue to invest in the education of its citizens because it is the right thing to do. We will continue to invest in our frontline managers of our educational institutions because they are central to any education reform we seek to pursue, and we must equip them with the necessary tools to enhance their work to enable them deliver their mandate in a more efficient manner”, he declared.

In attendance at the event were the Minister of Education, Dr. Matthew Opoku Prempeh, the Director-General of the Ghana Education Service, Prof. Kwasi Opoku Amankwaa, directors of both the Ministry and the GES as well as heads of agencies under the Ministry.