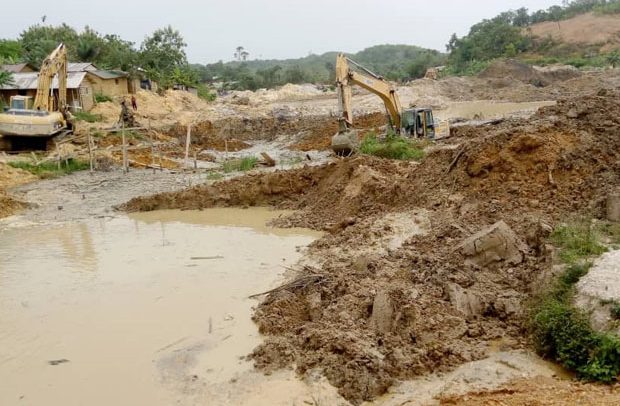 Ghana is in crisis! Ghana is at the crossroads where it has to choose between survival and death. The combined mushroomed legal and illegal surface mining, called in the local parlance as galamsey, is inflicting irreparable damage to the ecology of the nation.

The nation’s water bodies, fertile and arable lands, virgin forests as well as the air are being destroyed and polluted beyond recognition and repair.

The destruction of the ecology is masterminded and orchestrated by some insatiably greedy, short-sighted and irresponsible Ghanaians operating in alliance with equally heartless foreigners, especially the Chinese, who are subtly on a mission to conquer and colonize Ghana.

I get peeved when I see some myopic politicians crazy for power, do politics with the fight against galamsey. The war declared on galamsey is to guarantee the survivability and sustainability of Ghana and the people therein.

Therefore, for any idiotic political party and, or, politicians to go behind promising galamseyers unfettered access to their activities or trade if they voted for them to ascend power is the highest corporate crime any Ghanaian could commit against Ghana and Ghanaians.

The current rules amid limitations of engagement to fighting the galamsey will fail, taking us back to square one, if we failed to declare a total ban on galamsey activities until everything has returned to normality, then we devise a farsighted and more comprehensive methodology and policies for doing small scale mining in Ghana or we ban it totally.

Should we stick to the current rules of engagement to only prevent illegal surface and alluvial mining from within the radius of 100 metres from the major river bodies, what about the wanton destruction of the arable and fertile lands and virgin forests?

From the military officers on the ground charged with stopping galamsey activities in operation within a 100-metre radius from rivers, the entire exercise will be fruitless at the end of the day unless they are allowed to fight galamsey within 2 kilometre radius from each bank of the river.

Ghana stands to lose more lives caused by sicknesses coming from galamsey, more virgin forests, more fertile and arable lands than any benefits we stand to gain from the ravaging and irresponsible galamsey activities ongoing in Ghana.

I am solidly behind His Excellency the President, Nana Addo Dankwa Akufo-Addo, declaring war on galamsey in Ghana. He has to go further by charging the military to destroy any machinery being used for illegal or legal surface mining in the country now that we are in total crisis with time running against us to saving Ghana from destruction.

From the soldiers on the ground, what they are doing at the moment to fighting galamsey will end up being only skirmishes if they are not allowed to curb galamsey activities within a minimum of 2 kilometre radius from water bodies.

All politicians, government officials, traditional chiefs and political party sycophants involved in galamsey activities must be arrested and punished without any ifs and buts.

Parliament must pass a bill to give the president extra powers to use any methods deemed relevant and robust enough to stop the ruinous galamsey activities in Ghana.

Any political party that stupidly declares support and encouragement for galamsey activities in the hope of being voted into power must rather be rejected by the Ghanaian electorate for being wicked, selfish, myopic and irresponsible hence unworthy to lead the nation.

How I wish we had His Excellency Paul Kagame of Rwanda, the late President John Pombe Joseph Magufuli of Tanzania and the current President of Malawi, His Excellency Dr. Lazarus McCarthy Chakwera, in Ghana to deal a fatal blow to the galamsey activities to stop the menace within days to bring the nonsense to a closure.

Fighting galamsey is not a child’s play with kid’s gloves but boxing Heavy weight champion Mike Tyson giving a knockout punch to his opponent in the ring.

All sensible Ghanaians should put their foot down to support the president to successfully fight the galamsey menace in the country.

I had decided to scale down on publishing articles but I couldn’t take my eyes off when I saw the video of a soldier declaring how their exercise will end up in vain if they were not allowed to do more than they are currently permitted.

The court judges must expedite the trial of galamseyers arraigned before them without their usual collusive game of unnecessarily adjourning cases to end up strengthening the hands of criminals.

He who comes across this publication should please share it until it reaches every nook and cranny of the country. Let President Nana Akufo-Addo, the reminiscent of biblical Moses, Joseph or David, be aware that he has the 100% unwavering support of the no-nonsense and fearless son of Kumawu/Asiampa soil, Rockson Adofo, so he should fear no foe waging war on galamsey.

I dedicate this publication to all Ghanaians supporting the fight against the devastating galamsey ongoing in Ghana.