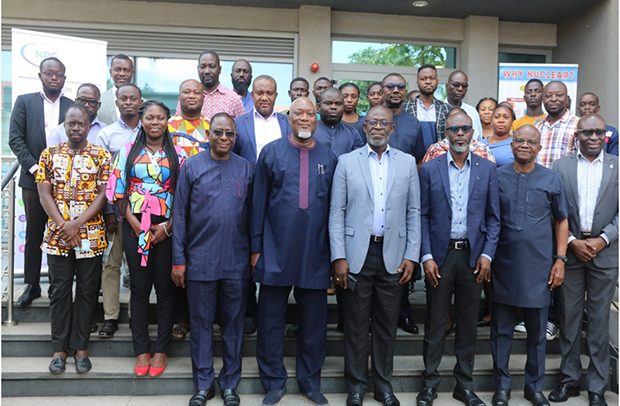 The workshop participants with officials of NPG and Bui Power Authority

The selection of the preferred nuclear vendor country and technology for the establishment of Ghana’s first nuclear power plant would be announced by the end of 2022, the Ministry of Energy has said.
The selection and approval of the vendor country and technology forms part of Ghana’s preparations towards becoming a nuclear power operator by 2030.
Deputy Minister for Energy, in charge of Power, William Owuraku Aidoo, said the government is committed to executing the project because it offers cheaper source of power and guarantees energy security for the country.
He observed that the Ministry has prepared a Memo on the Ghana Nuclear Power project and would soon present it to Cabinet for assessment and approval.
“Steps are being taken to finalise the selection of a preferred site to Ghana’s first nuclear power plant. Recently, Ghana issued a Request of Information (RFI) as part of the required processes to identify a vendor country and nuclear technology,” he stated.
He further noted that the RFI report is under review adding that the government would soon announce a decision on the vendor and technology.
This was disclosed at a three-day workshop for selected media practitioners in Accra on the theme: ‘Nuclear Safety, A Public Fear and Concern’.
The Executive Director of Nuclear Power Ghana (NPG), Dr. Stephen Yamoah, said his outfit has submitted a report to the sector ministry hoping that a decision would soon be made on the technology Ghana wants to adopt for the project.
Dr. Yamoah disclosed that the country is in its second phase of the Nuclear Power Programme as per the requirements of the International Atomic Energy Agency (IAEA).
According to him, NPG has completed the ranking assessment of four candidate sites and would, in due course, settle on the preferred site based on seismicity and environmental condition of the location.
He, however, did not disclose which region the site is situated but said due to the large volume of water required for the cooling of the plant activities, areas along the coast of the country are most preferred.
The participants of the workshop were taken through major issues concerning nuclear power including nuclear safety. They also embarked on a tour of the Ghana Atomic Energy Commission (GAEC) to see the nuclear reactor for research purposes and other facilities.