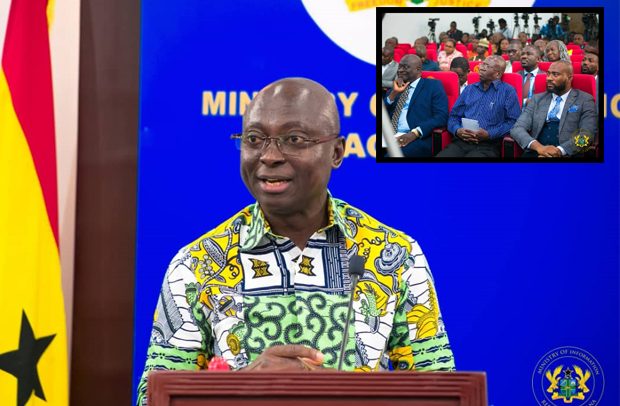 Samuel Atta Akyea delivering his address (inset: journalists and staff of the Housing Ministry seated at the press conference

The New Patriotic Party (NPP) administration has announced plans to construct about 250,000 affordable housing units annually over the next eight years to address Ghana’s housing deficit.

Currently, Ghana has an estimated housing deficit of over two million, and with the 250,000 yearly, the government plans to construct two million houses within eight years to bridge the gap.

The Minister of Works & Housing, Samuel Atta Akyea, made this known during the Meet-The-Press series organised by the Information Ministry in Accra on Tuesday.

“Ghana’s housing deficit is currently assessed at over two million and whereas the annual housing requirement is about 250,000 units, supply figures are about 45,000 units per annum,” he said, adding that “it is in the light of this that the government is embarking on a housing programme aimed at facilitating the construction of 250,000 housing units yearly over the next eight years through Public Private Partnership (PPP).”

Mr. Atta Akyea disclosed that the government has already started the project this year and is committed to ensuring everything is completed unlike in the past.

“The overall aim of the government’s infrastructure delivery policies and programmes is to build a modern and resilient society and to ensure that the development of infrastructure brings about improvement in the overall economic and social wellbeing of the people of this great country.”

He said some contractors abandoned the various housing projects started by former President Kufuor because they were not being financially resourced.

He hinted that the government would transform Nima, one of Accra’s biggest slums, into what he termed as world-class residential enclave.

He said the redevelopment of Nima forms part of the project to upgrade of slums in the country and said that cabinet is expected to approve the project during its next meeting.

According to the minister, “The growing incidence of slum development in Ghana has been the result of rural-urban migration, limited supply of land and regulatory frameworks that are, at best, indifferent and hostile to the needs of the poor.”

“Even though Nima and Maamobi routinely suffer from inadequate provisions of basic facilities such as housing, water, electricity and drainage systems, the communities continue to grow.”

The transformation of approximately 1,039 acres of prime land, which Nima and Maamobi occupy, he disclosed, would give meaning and beauty to the president’s vision of Inner City and Zongo Development.

“The Ministry of Works and Housing is collaborating with the Ministries of Lands and Natural Resources, Inner City and Zongo Development to make the aforesaid area a world-class residential enclave close to Jubilee House, the seat of government, without dislodging our good people who currently dwell in Nima and Maamobi.”