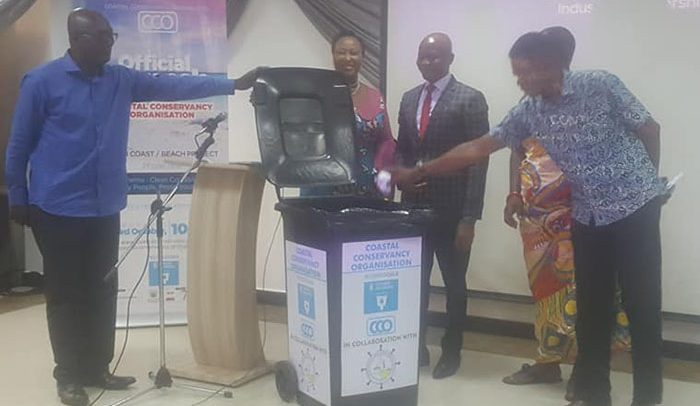 Michael Achagwe Luguje, Chairman of Coastal Conservancy Organisation and some dignitaries during the launch of the project

AS PART of its project to rid beaches of filth, Coastal Conservancy Organisation (CCO), a non-governmental organisation (NGO), in partnership with the Ghana Ports and Harbours Authority (GPHA), has started the largest beach and coastal lands clean-up project in the country.

The initiative is to ensure clean water, a vibrant ocean and accessible beaches for all through the provision of long-lasting solutions to the threats faced by some of the country’s beach ecosystems.

CCO is currently engaged in the clean-up of 10 beaches spanning from Tema Newtown to the Borla Beach at Osu, Accra.

Justice L. Eshun, Chairman of CCO, who spoke on behalf of the Executive Director, Adjoa S. Eshun, at the launch of CCO, explained that their aim was to ensure more regular and a sustainable cleaning regime to take away coastal pollution.

According to him, CCO is cleaning the beaches with the hope of improving sanitation situation and also the livelihood of the fishermen.

Michael Achagwe Luguje, Director General of GPHA, said the current environmental problems confronting the coastline were significant for port management since marine safety is not only limited to the seas but also what transpires around the port environment, thereby protecting the port environment from all forms of pollution that continues to be a central objective of the port industry.

According to him, GPHA is partnering CCO as part of its corporate social responsibility programme to rid the marine space of all forms of filth.

He appealed to maritime sector players to understand the relevance of the project and support it to succeed to cover the entire coastline.

For his part, Mrs. Esi Boni-Morkla, Environmental Health Analyst, Ministry of Sanitation and Water Resources, who spoke on behalf of the sector minister, called on the various metropolitan, municipal and district assemblies to enforce their by-laws to punish offenders in order to ensure the safety of our environment.

Asafoatse Nii Krakradar II of the Tema Traditional Council urged CCO to put in their best to sustain the project in order to ensure clean marine environment, without relenting on its effort.

Caption: Michael Achagwe Luguje together with Chairman of Coastal Conservancy Organisation together with other dignitaries launching the project.