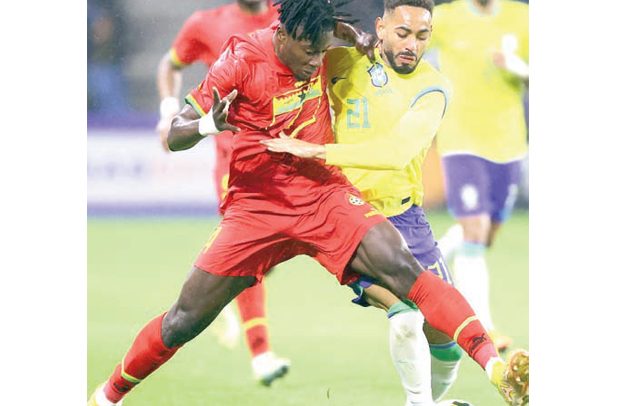 Salisu Mohammend tussle for the ball with a Brazilian player

Ghana legend Asamoah Gyan was impressed with Southampton defender Mohammed Salisu in his debut game for the Black Stars.

The 23-year-old honoured his invitation to the Black Stars for the international friendlies against Brazil and Nicaragua after refusing the call up severally under previous managers.

Salisu made a strong case ahead of the 2022 World Cup with an impressive performance against Brazil on Friday night.

The former Real Valladolid defender was introduced into the game in the second half with Ghana losing 3-0 to Brazil.

Salisu’s effect was felt at the back with his composure, defending and passing, as the Black Stars were able to hold the Seleceao from scoring a fourth goal.

Asamoah Gyan after the game gave a thumps up to the center-back following his impressive performance in the game.