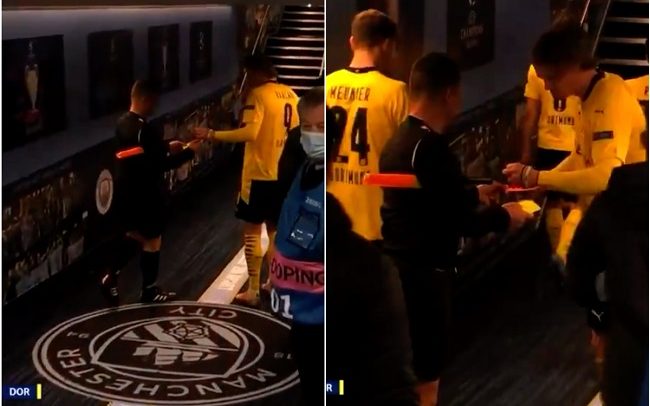 Europe’s top clubs might all be battling for the signature of Borussia Dortmund’s prolific striker Erling Haaland, but it was a Romanian assistant referee who managed to get the Norway international to put pen to paper on Tuesday.

Television footage showed one of the Romanian officials in charge of the Champions League quarterfinal first leg, won 2-1 by Manchester City, approaching Haaland in the tunnel after the game to get him to sign his yellow card — and succeeding in his quest.

The 20-year-old Haaland is the most sought after talent in the European game and has been linked with a move to City and their local rivals Manchester United as well as Spanish giants Real Madrid and Barcelona.

It is not normal protocol for match officials to ask players for autographs after games, and UEFA could respond, but City boss Pep Guardiola had no problem with the referee’s request.

Guardiola said, “They told me. Maybe he’s a fan. Why not? The referees were brilliant, the game was not a problem. The VAR told me it was not a penalty and [Jude] Bellingham, the leg is higher than expected. Yeah, the referees were perfect.”

After the match, Borussia Dortmund interim coach, Edin Terzic, said Man City boss Pep Guardiola was complimentary about his team’s performance, but the Bundesliga boss said his side would be ready for the second leg on April 14.

“Pep had some nice words for me at full-time, but we’re not done yet. We’ll see each other again in eight days’ time,” said Terzic. “It’s half-time and the tie is still open.

“We’ll be ready to give it our all to overturn the result and reach the next round. We kept their chances to a minimum and posed a threat ourselves going forward. It was evenly matched, so we’re disappointed with the result in the end.”