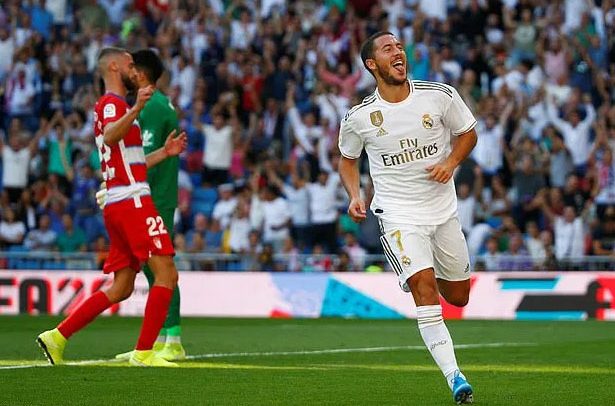 Even his former Chelsea team-mate Thibaut Courtois was given an unexpected boost because Alphonse Areola deputised for him and dropped the clanger that almost let Granada back into the game.

“We need to see Eden like this, playing well, and scoring goals,” said Zidane.

“He wanted that, he was happy in the dressing room after the game and we hope this is the first of many.”

The first to congratulate Hazard after his goal was Gareth Bale, he knows the importance of making a good start at the Bernabeu, he knows how difficult it has been for Hazard.

Bale also played his part in the win. He reminded Zidane why he probably should have been involved in midweek against Brugge with a velvet assist for Karim Benzema’s opener.

Benzema’s goal came after just two minutes. Bale and Alvaro Odriozola charged down the right together. The young full back wanted Bale to run ahead of him but Bale signalled for Odriozola to go long and play the ball back to him.