I didn’t doubt your capabilities; I’m not surprised at your performance – Kenyasehene tells Agric Minister 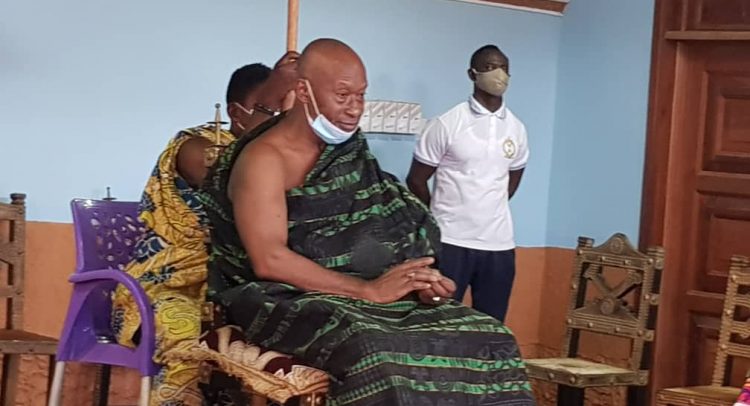 The Paramount Chief of Kenyase in the Ahafo Region,  Nana Osei Kofi Obiri, has paid glowing tribute to the Minister for Food and Agriculture, Dr. Owusu Afriyie Akoto,  for his outstanding performance during the first four year administration of the President Nana Addo Dankwa Akufo-Addo-led NPP Government.

Welcoming Dr. Afriyie Akoto and his entourage to his palace during a courtesy call on him on Monday, July 5, 2021, Nana Osei Kofi Obiri noted that he had full confidence in the capabilities of the Minister to perform knowing his background and his passion for agriculture.

“I never doubted your competence when President Akufo Addo nominated you for the position of Food and Agriculture Minister; I am therefore not surprised at all at the massive change and successes you have brought to your sector” Nana Obiri Kofi noted. 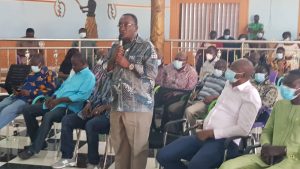 According to the Chief, food is now available all year round and within the means of every citizen thanks to the Government’s flagship Planting for Food and Jobs initiative,  stressing that he and his people have benefitted tremendously from the programme.

Nana Osei Kofi Obiri further remarked that the commitment and passion exhibited by the Minister towards his job was commendable, adding that “the Agric Ministry has seen tremendous change under his leadership”.

The Paramount Chief however expressed concern about the deplorable nature of roads in his community, stressing that the development was hampering the business activities of his people,  particularly farmers in the area.

“As you know we Ahafo people are predominantly into farming and so agriculture is our major means of livelihood but our road network is very bad; I hope you have seen it yourself during your visit to this area, I am pleading with you to add your voice to this concern so that the Government of which I know you’re a key member can  do something about it” the Chief pleaded.

Dr. Owusu Afriyie Akoto, on his part, expressed gratitude to the Chief and his elders for the warm reception accorded him and his entourage by the Ahafo community.

The Minister said he chose to begin his five day regional tour from the  Ahafo Region as an honour to the huge contributions the region has made to agriculture in the country.

He said it was for this reason that Goaso, the Ahafo Regional capital was selected as the venue for the official launch of the Government’s flagship Planting for Food and Jobs initiative in April 2017.

“Anytime I visit Ahafo community,  it evokes memories of how my late Father Baffour Akoto used to bring us here as children anytime he was visiting his farms; I know a lot about Ahafo and your massive contribution to agriculture in the country” the Minister emphasized.

Dr. Owusu Afriyie Akoto therefore pledged to liaise with his colleague Roads and Higways Minister  to discuss ways of addressing the issue of deplorable roads in the area.

The Minister further pointed out that the Government of President Nana Addo Dankwa Akufo-Addo,  is very committed to transform the economic of the country through agriculture.

He said the government would continue to invest in agriculture in order to improve the livelihoods of the larger farmer population in the country.

Meanwhile,  the Minister is expected to continue his tour with visits to both the Bono and Bono East Regions before leaving on Thursday for the Ashanti and Eastern Regions.