I Still Insist Rawlings And Kufuor Should Write Their Memoirs 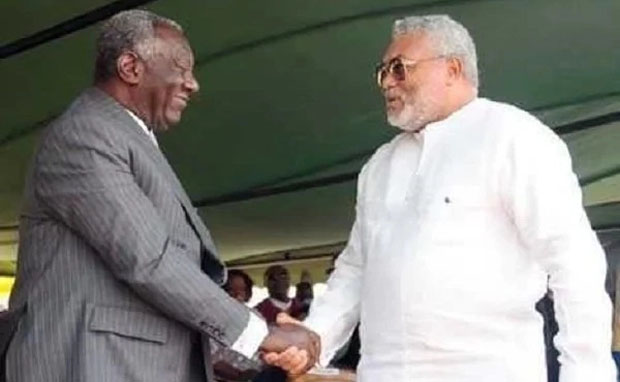 When Dr. Kwame Nkrumah was overthrown by the military adventurists and he sojourned in Sekou Toure’s Guinea, the man spent all his time sitting by the pond near his Villa Sylla mansion donated to him by his friend Sekou Toure. He tried to avoid his colleagues who he went into exile with and concentrated in writing his memoir titled ‘Dark Days In Ghana’. When the books hit the shelves in bookshops in Ghana, the ‘Khaki Boys’ quickly ordered the withdrawal of the books, and in some cases, they were burnt.

Very unfortunate for the soldiers, those of us who were students and loved reading had laid our hands on the books and read them thoroughly.  The book became so precious to us that nobody wanted to even lend it to a friend who had no copy to read.  When school went on vacation, I took mine to my ‘holy’ village where it still lies among my old and dusty novels.  Once a while, I will go for the book and read it again, particularly when the issue of Dr. Kwame Nkrumah comes up for discussion.

In the ‘Dark Days In Ghana’, you will realise how people you trust so much can betray you at the last moment when things change for the worse situation. You will also realise how some of your best friends will stick to your apron come rain or shine.  In fact, if the soldiers had not banned the books, there could have been a civilian revolution against them. Apart from Dr. Kwame Nkrumah, I am yet to read any memoir written by any of our former heads of state ‒ dead or alive.

I also had the opportunity to read Henry Kissinger’s (former Secretary of State of the US) memoir titled ‘Shuttle Diplomacy’.  We cared less about any war between the Israelis and their Palestinian counterparts but after reading the ‘Shuttle Diplomacy’, we came to realise how what happened in the Middle East could concern us.  Imagine Kissinger flying all the way from the US to Israel and Palestine, fly back the same day to consult the president of the US, all in an effort to avoid an impending bloodbath between the two protagonists.  Today, anytime the trouble between Israel and Palestine crops up, I go for the ‘‘Shuttle Diplomacy’ to read. In the US, they have their presidential library where sitting presidents visit once a while to research on current issues which might have happened some time ago.  Former President George Walter Bush was successful in the war against Iraq because his late father, George Bush Snr, had fought the Operation Desert Storm and we have documents in the presidential library to guide any future president who will be forced to go to war.

Sometime ago, I wrote in this column that the leadership of the NPP did a very big mistake when they refused to read Kennedy Arthur’s book titled ‘Chasing the Elephant Into The Bush’. Even though the title of the book was annoying, if they had read the book, there would not have been the need to file the election petition at the Supreme Court.

Ex-President Kufuor too had admonished the NPP to be vigilant at the polling stations because elections are won there. Dr. Arthur too once mentioned the same.  In the 2016 general election when the NPP ‘opened their eyes wide’ and seriously policed the polling station, the result was what we saw when candidate Mahama was disgraced at the polls.

About 10 years ago, I wrote in this column that because Rawlings and Kufuor are the only living heads of state in Ghana, there was the need for them to write their memoirs for future generations to know what really happened during their tenure of office.  It is easy to twist history, but when there is a written document which sets the record straight, generations yet unborn will find it very difficult to twist history. Rawlings in particular has a chequered history to tell Ghanaians, having ruled the country for close to two decades.  Because he has refused to put pen on paper, some upstarts who were nowhere near those hot days of his two revolutions continue to lie. Apart from the fact that his memoir will make him rich (something he doesn’t need, anyway), it will go a long way to set erroneous impressions about him as a human being, a leader and statesman. The gruesome murder of the three High Court Judges and the army officers is an albatross which is still hanging on his neck, not to talk about the murder of the top military officers, including three former heads of state. I remember when he was confronted with the excesses of his two revolutions, the only answer he gave was that ‘to make an omelette, one must break eggs’.  Sir, that is not enough, you need to write your memoir and tell nothing but the whole story.  Rawlings has his glorious days and sordid past, but he is the only one who can tell them.  After all, who will drink a bitter pill for a sick man?  If Mr. Rawlings insists not to write his memoir, the fact that he introduced the district assembly will be washed down the gutter many years after he is dead and gone.

Mr. Kufuor has no choice but to write his memoir now.  Age is not on his side and he has a lot to tell us in his book.  We will like to know how he managed to reshape a broken and a shattered economy.  We will like to know how he managed to convince the Chinese to build the Bui Dam which had been on the drawing board since 1927.  How was he able to convince the Indian government to build us the Jubilee House?  If Mr. Kufuor writes in his memoir how he managed to introduce the Free Maternal Care, children who were born under the programme and who are now adults will forever be grateful to him.  That is why the sages say ‘book no talk lie’.  I still insist that these two gentlemen should write their memoir because we need them on our library shelves for our great grandchildren who would be born too late to understand what happened.  As long as I still possess my fountain pen and lion ink, I will come back again on this all-important topic.