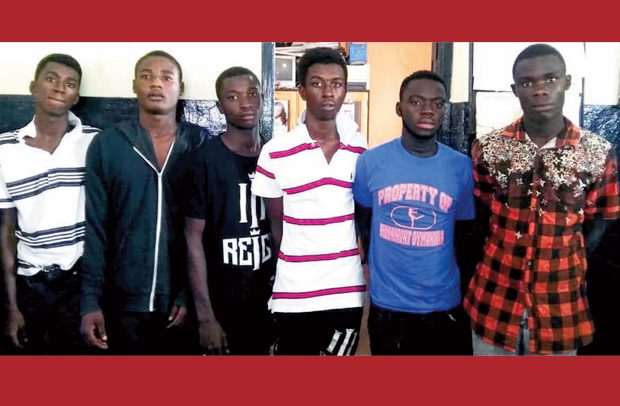 George Somuah Bosompem, the 57-year-old tutor of Asiakwa Salvation Army Basic School in the Abuakwa South Municipality of the Eastern Region, who was brutally beaten to death, revealed that the six boys carried out ‘reprisal’ attack on him owing to a dispute over snails three years ago.

In an audio recording by a colleague female teacher, the deceased narrated how he suffered at the hands of six boys, who are currently facing prosecution.

The late Religious and Moral Education teacher, in his police statement, said he did not travel to the Information Centre to warn the suspects to desist from defecating on the school compound as reported earlier.

He said in the audio recording that the six suspects used broken chairs to beat him up mercilessly resulting in his death later.

DAILY GUIDE gathered that the school has a snail farm, which was encroached by some youth in the community.

The youth also used the school compound for immoral activities such as smoking of ‘Wee’ and sex at night.

It turned out that the six suspects are all former students of the Asiakwa Salvation Army Basic School, and four of them were said to have been sacked by the school authorities due to insubordination and stealing of snails on the school farm.

The sacked suspects were said to have been arrested by the Kyebi Police three years ago after an investigation conducted by the deceased and two other teachers.

But instead of prosecuting them, some opinion leaders intervened and the suspects were made to pay for the cost of the snails.

In the audio recording, the deceased is heard telling the female colleague that the incident happened in the night contrary to earlier reports.

He stated categorically that the attack did not take place in the school garden as being speculated.

The deceased also disclosed that he never confronted the suspects.

The late Bosompem narrated that on 25th April 2019 around 8pm, he informed his wife that he was going to pay money he borrowed from a colleague identified as Osofo Emmanuel, who lived across the school about 200 metres away.

According to him, he met a lady who lived with Osofo and inquire about his whereabouts.

The deceased said that he decided to urinate and in the process the suspects pounced on him, dragged him to one of the classrooms and beat him mercilessly with some broken chairs.

He said the suspects told him he was being punished for what he did to them three years ago over the snails.

The deceased said the suspects also told him he was not the target and that they wanted to attack one OP and Justice who are all teachers in the school.

The late Bosompem said that he shouted for help and the lady co-tenant rushed to inform one of the teachers, who quickly moved to rescue him with other residents.

He added that fortunately, a police patrol team saw them at the scene and managed to arrest one of the suspects, Richard Amaning, 18, alias Konko, who pretended to be helping him to get into a vehicle.

He said that he was able to inform the teacher who came to his rescue that Richard Amaning was part of the assailants but was pretending to be helping.

The deceased, who was severely injured, was rushed to the Kyebi Government Hospital and admitted for three days.

The Kyebi Police took his statement on the hospital bed.

He was later referred to St. Joseph Hospital, popularly called Roman in Koforidua, when his condition became critical.

The late Bosompem said he suffered fractured bones at his back and added that he was charged GH¢2,000 to undergo an intensive operation by the doctors in Koforidua.

He reportedly died the following day at about 9 am.

The prosecutor, Margaret Kontoh, told the court presided over by Alice Efua Yirenkyi that further investigations showed that they did not give their right ages to the police when they were arrested and records in their respective schools revealed their ages.

The prosecutor prayed the court to remand them to enable police investigate their records at the Birth Registry.

Defence counsel, led by Peter Nimo, is pushing for the trial to be sent to Juvenile Court because the suspects are underage.

He said two of the accused persons – Mireku Emmanuel and Philip Kodie – were not in the community when the incident happened.

The court remanded them to reappear on May 25.

Mr. Bosompem was brutally assaulted by the six teenagers suspected to be ‘Indian Hemp’ smokers on April 4, which led to his death.