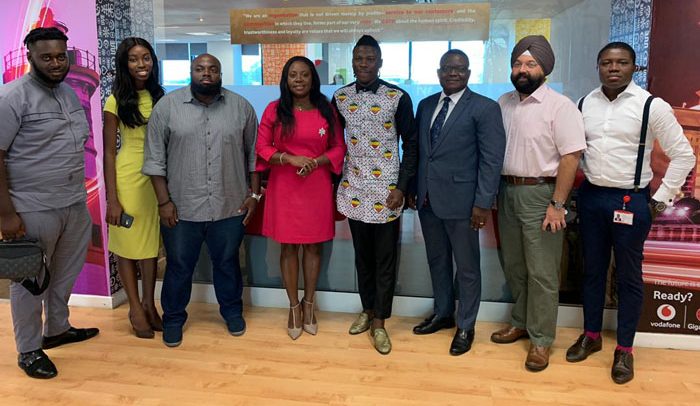 Stonebwoy (4th right) in a group photograph with some Vodafone officials

Stonebwoy, who is also the brand ambassador for Samsung Electronics, has commended Vodafone Ghana for its unprecedented commitment to the music industry in Ghana.

Vodafone has been very active in its support of the music industry since it began operations in Ghana in 2008.

The company’s headline sponsorship of the Ghana Music Awards enters its ninth year on the 18th of this month, and already, artistes and producers are positioning themselves to grab several awards.

Other musical platforms, including 020 – Live and the Africa Legends Night, all receive great support from the telecom company.

Commenting during a courtesy call on the new Vodafone chief executive, Stonebwoy said the company’s contribution to the music industry in Ghana has been tremendous over the years and it is testament to their love for Ghanaian music.

He added that it is refreshing to see the appointment of a Ghanaian chief executive for the company.

The new CEO, Patricia Obo-Nai, interacting with Stonebwoy and his team, said, “Our support for the music industry ties in with what our brand represents – which is ensuring an exciting future for our customers and stakeholders.

Going forward, it is our hope that we will continue to enhance our commitment and help put Ghanaian music on the international map.”

Stonebwoy was in the company of some members of his team, which include his marketing manager.

The dancehall artiste has been nominated for six awards at the upcoming Vodafone Ghana Music Awards (VGMA), which takes place this Saturday, May 18, 2019 at the Accra International Conference Centre (AICC).