I’m Coming Back To Fix The ‘Mess’ – Mahama Claims 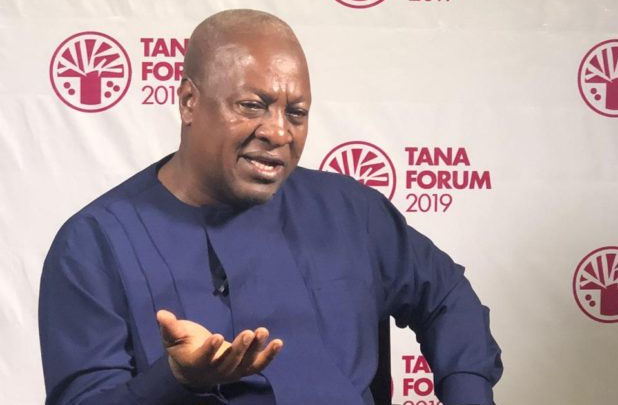 Former President John Mahama has claimed that Ghanaians are clamouring for his return because he believes the current NPP administration is messing things up.

“There’s a lot of hardship in the system,” he said at a market in Dambai in the newly-created Oti Region yesterday, where he is on a two-day campaign tour and added, “But by the grace of God, next year, 2020, is an election year. And I know that by the grace of God, Inshallah, the NDC is coming back into government.”

“We are coming back to fix every mess so that Ghanaians can have some peace of mind. We’ll fix every mess nicely and relieve you of your burden,” he said.

The former president, in his bid to recapture power once again after losing massively in 2016 to the then opposition NPP, has been touring the country discrediting the NPP government and even laying claims to some of the major social intervention programmes initiated by President Akufo-Addo and his NPP government.

While visiting the Savannah Region last week, the former president made an astonishing claim that it was during his tenure that the ‘One Village One Dam’ (1V1D) initiative – that is being vigorously pursued by the current NPP government – originated.

Mr. Mahama claimed that the NDC government he led constructed 120 dugouts before it left office in 2016. However, he does not appear to indicate where some of the dams are located.

The former president then threw shades at President Akufo-Addo and his administration that the dams being constructed are inferior, suggesting the government is wasting taxpayers’ money.

“Their dams are even of inferior quality because when it rains, the dams break and the water flow away,” he claimed.

Mr. Mahama said cynically that the rains had exposed what he called NPP’s “lies” since all the dams they (NPP) claimed to have built had been washed away by the rains.

“Always remember that when you deceive people, the reality catches up with you. By God’s grace, the NPP came to power and they have started building what they call dams. It turns out that the dams they were talking of are the same dugouts that we were digging under his administration,” he pointed out.

The former president indicated that the time has come for the people to choose what he called ‘truth’ over ‘lies’.

Mr. Mahama’s reign was characterised by persistent power crisis, high unemployment, coupled with many misplaced priorities in the implementation of government projects.

Under his tenure, Ghana was under the control and dictates of the International Monetary Fund (IMF), which directed a freeze in public sector employment.