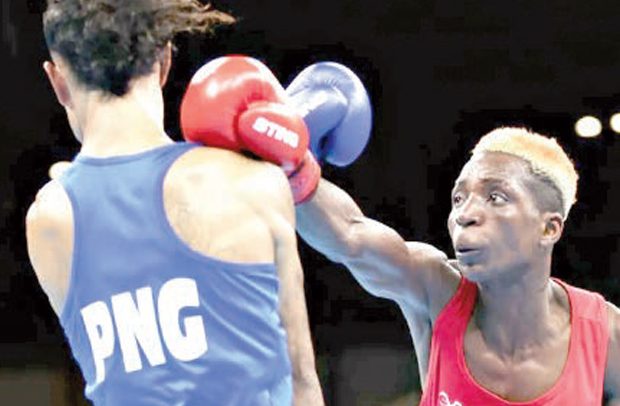 There goes that man again: Joseph Commey launches an attack on Allan Oaike

AFTER A slow start, Team Ghana now seems ready to pick a medal at the Commonwealth Games in Birmingham.

This follows a significant win in boxing by Joseph Commey, nicknamed as ‘Jaguar’, who was on ‘fire’.

The Ghanaian pugilist, from his body language, was mentally and physically fit and ready to shine at the games.

And Jaguar didn’t disappoint when he eventually mounted the ring to face Allan Oaike of Papua New Guinea.

From the blast of the bell, Jaguar went straight on his hapless opponent, whom he bombarded with heavy blows.

Surprisingly, Allan displayed braveness as he stood on his feet after taking several blows to survive the first round.

But Allan eventually succumbed to Jaguar’s heavy punches from all angles as the referee stopped the bout in the second round.

With the victory, Joseph Commey, who is a medal hopeful for Team Ghana, has now advanced to the quarter final stage.

Interestingly, Jaguar enjoyed massive support from the crowd, who certainly were in love with his sublime boxing skills.